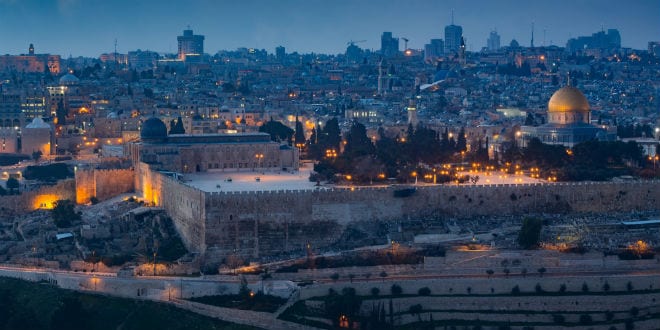 Ahead of the upcoming Republican Party convention in Cleveland later this month, the lobbying affiliate of Pastor John Hagee’s influential Christians United for Israel (CUFI) non-profit is calling on the GOP to reiterate its historically strong support for Israel by declaring Jerusalem as the “undivided and eternal” capital of the Jewish state.

In a letter obtained by JNS.org that was sent to Republican convention delegates on July 6, former Ronald Reagan administration official Gary Bauer, director of the CUFI Action Fund lobby, called for the Republican Party platform to “strengthen its language in support for Israel with Jerusalem as Israel’s ‘undivided, eternal’ capital.”

The CUFI Action Fund is a 501(c)(4) organization, meaning that it has more leeway on political activities than the 501(c)(3)-status CUFI. The Action Fund’s call stems from a small, yet significant change in the Republican Party’s platform language on Jerusalem from 2008 to 2012.

“Many analysts in the Middle East saw this as a signal that even the pro-Israel Republican Party was in favor of the division of Jerusalem and supported awarding half of the city as a capital to a new Palestinian state,” stated the letter from the CUFI Action Fund.

Bauer told JNS.org that he did not understand the GOP’s decision in 2012 to alter the language on Jerusalem.

“It didn’t make any sense to do it,” said Bauer. “Certainly the current government in Israel has no intention of dividing Jerusalem, and from what I have seen in public opinion polls, there’s no real sentiment among the Israeli people to do it either.”

As such, Bauer said the CUFI Action Fund considers it important that at least one of the major American political parties “make it clear that no part of Jerusalem is a settlement.”

“It is a city with roots in Judaism that goes back well before any current competitor could lay claim on it,” Bauer said, referring to the Palestinians’ demands to divide Jerusalem and establish their own capital in the eastern half of the city.

While the CUFI Action Fund is pushing for changes on the Republican side, the Democratic Party is facing its own questions over its platform’s support for Israel. The Democrats are also holding their convention later this month.

There is growing concern over the Democratic Platform Drafting Committee members who have been appointed by presidential contender Sen. Bernie Sanders (D-Vt.). The committee members include pro-Palestinian activist James Zogby, who is pushing to insert language that is critical of Israel in the platform, such as “occupation.” Such language would break from the party’s longstanding pro-Israel stance. Another committee member appointed by Sanders is Cornel West, an activist in the anti-Israel Boycott, Divestment and Sanctions movement.

While there is a growing divide among more moderate and liberal leaders on the Democratic side, presumptive Republican presidential nominee Donald Trump is also facing the challenge of uniting his own deeply divided party at its convention.

Bauer said he understands that this year’s Republican convention has its own “worries and challenges,” but that he feels there is a “solid majority in favor of this change” on the Jerusalem language.

“I sent out the letter on Wednesday morning (July 6) and have already heard from dozens of members of the committee who think this would be a great change and they support it,” he said.