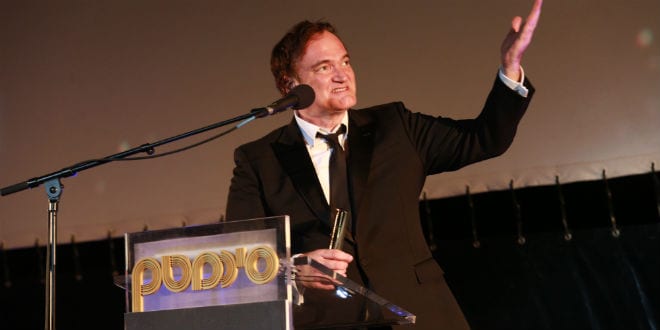 The annual International Jerusalem Film Festival commenced on Thursday night, at the Jerusalem Cinematheque. Award winning film director Quentin Tarantino surprised audiences by opening the festival and revealed to Tazpit Press Service (TPS) that he is no stranger to Israeli films, old and new.

The Jerusalem Film Festival was inaugurated in 1984 after Jewish philanthropist and cinematographer, Lia van Leer, served as a judge at the Cannes film festival and decided to organize a similar event in Israel. Beyond its contribution to Israeli film, the festival is one of the only platforms that presents international contemporary cinematic trends to its local audiences, and introduces its international guests to Israeli cinema.

“I’m now somewhat familiar with Israeli movies, [they are] not bad,” Tarantino told TPS, during the opening gala of the festival at the Jerusalem Cinematheque.

Tarantino who was dubbed by several film critics as “an encyclopedia of movies,” is known for his extensive knowledge and taking influence from various foreign, independent, low-budgetand obscure films. And according to Tarantino himself, Israeli films also have their place in his heart and mind.

“I enjoyed Big Bad Wolves. actually I really loved Big Bad Wolves,” Tarantino told TPS. “And there’s the classic Israeli film ‘Eagles Attack at Dawn,’ not to be confused with the Israeli one about Entebbe operation, that’s ‘Operation Thunderbolt’, but it’s also good.”

Big Bad Wolves is an independent 2013 horror-thriller written and directed by Aharon Keshales and Navot Papushado. Tarantino himself lauded the film as “the best film of 2013.” While Eagles Attack at Dawn is a 1970 Israeli low-budget action film directed by Menahem Golan and starring Yehorm Gaon, about an Israeli commando team breaking IDF prisoners of war from a Syrian prison.

Tarantino, who was a surprise guest of the festival, arrived to screen a restored 35-millimeter copy of his Oscar-winning film, Pulp Fiction, from his own personal archive and hold a special panel with the audience.

During the Festival’s opening ceremony at Sultan’s Pool by foot of the Old City walls, Tarantino was given a special award by Minister of Culture, Miri Regev, and Jerusalem Mayor, Nir Barkat for his contribution to cinematic art.

This is Tarantino’s second visit to Israel. His previous visit was in 2009 when he promoted his controversial World War II fantasy, Inglourious Bastards.

The festival’s opening ceremony concluded with a premiere of Spanish director Pedro Almodóvar’s newest film, Julieta. The film’s leading actress, Emma Suárez, who played the titular role was another guest of the festival.