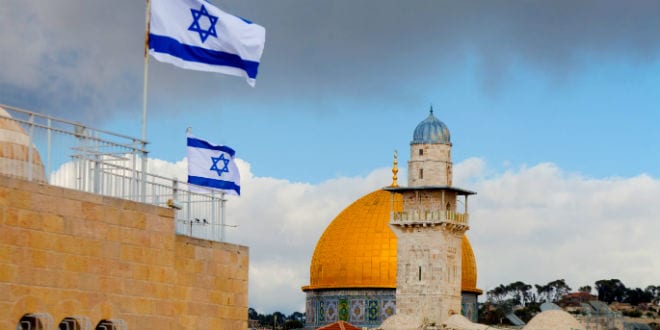 The stabbing that killed 13-year-old Hallel Ariel last week has led the young teenager’s family to take that horror and turn it into a message of hope and holiness centered around the Temple Mount. In a controversial call for Jews to ascend to the Temple Mount next Tuesday, her parents hope to counter the terror that killed their daughter.

Visitors who came to console Rina Ariel on Sunday expected to see a woman overcome with the most powerful grief a mother could experience. Instead, they were greeted with a moving message of hope.

“By coming here, by living here, we are showing that we will win,” the grieving mother told visitors. “I am married to a kohen (priest). I am the daughter of a kohen. The way we continue, is to show that if we go up to the Temple Mount and work hard to build the Temple, our own houses will not be destroyed,” said Hallel’s mother.

“My sister lives on Mount of Olives near the Temple Mount,” she continued. “I live far from the Temple, near Hebron. So our story starts in Hebron but it will end in Har Habayit (The Temple Mount).

“We have to continue,”  she insisted. “We have to plant the grapes and drink the wine.”

Rina then quoted the Book of Samuel.

And also the Glory of Israel will not lie nor repent; for He is not a man, that He should repent. I Samuel 15:29

In the homiletical teaching of Psalms, this verse is spoken by God to comfort the Nation of Israel after Yom Kippur, by assuring them that, by virtue of the mitzvot (Torah commandments), their enemies will never overcome the Jews.

During a condolence call paid by Israeli Prime Minister Benjamin Netanyahu, Rina spoke with the leader about the connection between the murder of her daughter and the Temple Mount.

“It is forbidden that a private household should be destroyed, but we must direct our concerns to the House of God,” Rina was quoted as saying by the Temple Institute. “It is wholly untenable to allow the Muslims to have control of the Temple Mount.”

Rina explained to the prime minister that the real cause of terror was the Muslim monopoly on the Temple Mount.

“There is a direct line from there to the murder of my daughter,” she told Netanyahu. “This is not something disconnected. It is one and the same. If they receive a prize, if they violently riot and I [as a Jew] am chased off the Mount [by my government], then they come to my house and murder my daughter.”

As a reminder that Muslim violence is directly connected to the Temple Mount, an anonymous Israeli hung a photo of Hallel with her family, posing in front of the Dome of the Rock, on the locked gate preventing Jews from going up to the Temple Mount.

“Hallel longed for the redemption,” Rina said. “From an early age she ascended the Temple Mount. When we build the Holy Temple and it serves as a light to the nations, there will be no more murder.”

Yael Kabillo, Hallel’s aunt, is the chairperson for Women of the Holy Temple. From the first day of the mourning period, the two women began planning a mass ascension to the Temple Mount in honor of Hallel.

“The terrorist stabbed a young Jewish girl deep in her heart,” Kabillo told Breaking Israel News. “We have to awaken our hearts to the heart of our nation, which has always been Temple Mount.

Zvi Aranoff uncle, Rina’s brother and Hallel’s uncle, spoke to Breaking Israel News about the reaction to the murder.

“My sister [Rina] is responding with love and light,” he explained. “She wants people to see what a Jewish response is, that we don’t celebrate death, not even the death of our enemy. It’s unfortunate that the other side isn’t like that. They celebrate death.”

The Ariel family has called for a mass ascension to the Temple Mount next Tuesday, July 12, at 8:30 AM. A short ceremony will be held beforehand in memory of Hallel. They have requested that people around the world pray at that time for the Jewish people to return to their home on the Temple Mount.