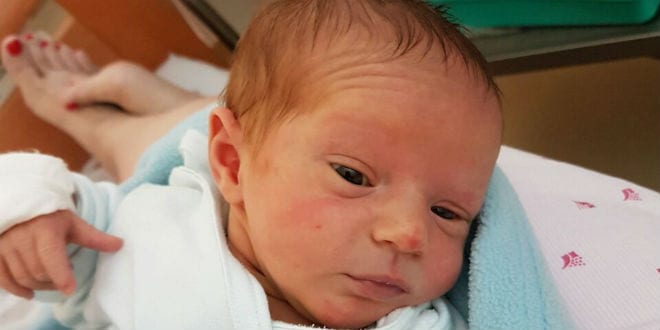 Less than a week after 13 year old Hallel Yaffa Ariel was killed in her home in the Judean community of Otniel, the grief stricken family were once again blessed to hold baby girl Hallel.

Michal and Dovi Gellar, who live in the northern city of Hispin, were proud parents of six delightful children, ages ranging from 18 to 6 and thought their family was complete. It was after Operation Protective Edge in 2014, however, when the Gellars experienced a newfound burst of desire to bring another soul into this world.

On Saturday night, when the Ariel family was mourning the lost of their eldest, Michal and Dovi welcomed their youngest: a seventh child.

Hallel Yaffa Ariel was sleeping peacefully in her home on Thursday morning when a Palestinian terrorist jumped the fence protecting Israelis from infiltration, and stabbed the young girl numerous times. Hallel fell unconscious, but despite being rushed to the hospital, she succumbed to her wounds.

Michal and Dovi, who told Ynet News of their close friendship with the Ariel family, determined it fitting to name their newest bundle of joy after “the most amazing girl in the world,” according to Hallel Yaffa’s aunt. The three day old baby Gellar was therefore named Carmi Hallel (in Hebrew, ‘my vineyard of praise’).

“Through all the grief, we saw the light in the late Hallel’s eyes when she danced. We felt how her light strengthened our lives. Together, the names Carmi and Hallel give a noble meaning with huge appreciation and a connection to life forces,” said Michal.

The baby’s name comes brings with it bittersweet sentiments for the Ariels. When she was informed of the Gellars’ decision to name their daughter after hers, Rina Ariel, said, “I was very moved to hear about the baby Karmi Hallel. But it brings up for us feelings of sadness. We understand that Hallel isn’t just ours anymore, but all the nation of Israel’s.”