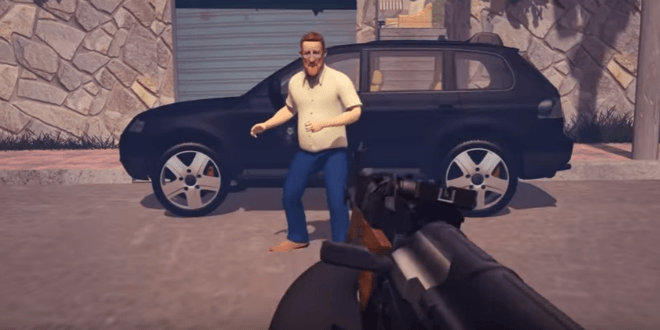 Rabbi Yehudah Glick, the newly appointed Likud member of Knesset, is the target of a recent animated Hamas video which shows, in excruciating detail, the terror group’s plan to assassinate the champion for human rights on the Temple Mount in front of his own home.

The two-minute video began appearing on social media and YouTube on Friday. It was produced using video game technology. In the graphic video, two masked terrorists penetrate the security fence of Glick’s hometown, Otniel, in the hills of Hebron. They wait in ambush outside his house as Glick drives home. When he steps out of his car, the terrorists open fire with Kalashnikov rifles and kill the character, whose likeness to the actual Glick is undeniable. A song in Hebrew celebrates the successful murder and threatens others like him.

The disturbing song warns, “To Al-Aqsa, Jews may never enter. Whoever goes against this, should come with burial shrouds.”

The threat comes after Glick miraculously survived an assassination attempt in October 2014. Palestinian Mutaz Hijazi from Abu Tor shot Glick four times in the chest in Jerusalem, claiming he did it “for al Aqsa” (the Dome of the Rock), but incredibly, Glick eventually enjoyed a full recovery.

However, he has remained a target for Hamas, which has focused on Glick as the face of a campaign to undermine the status quo on the Temple Mount and allow non-Muslims to freely visit and pray at the site. Indeed, the deadly wave of violence that has plagued Israel for ten months began in Jerusalem and centered around a struggle for the Temple Mount, which Muslims see as exclusively an Islamic holy site to which the Jews have no right.

Glick’s work is highly controversial, and he frequently referred to in the media as a right-wing extremist. When he was recently appointed to the Knesset, Breaking Israel News asked him if this was an accurate description of him. He responded that it was.

“I am an extremist: an extremist for human rights,” he said. “We have to end this absurd situation that people are prevented from praying on the Temple Mount on the basis of their religion.”

The Knesset has provided Glick with extra security in light of the disturbing video.

The small Jewish community of Otniel has seen multiple terror tragedies in recent months. On Friday, Rabbi Michael Mark, a close personal friend of Rabbi Glick, was murdered while driving with his wife and two children. His wife was seriously injured and is still fighting for her life in the hospital.

In January, a Palestinian teen from a nearby Arab village broke into the Jewish settlement and attacked Dafna Meir in her home. Meir wrestled with the terrorist, protecting her three children who witnessed the attack. She was stabbed to death but the terrorist fled and her children were saved.