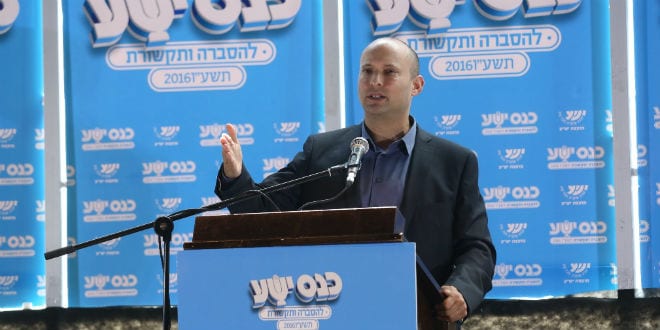 Israeli officials emphasized the importance of maintaining a clear and undivided Jerusalem this morning at the annual conference held by the Yesha Council, an organization representing the Jewish communities of Judea and Samaria.

“Givat Hamatos is a strategic point for the future of Jerusalem,” said Education Minister and Jewish Home Party Chairman Naftali Bennett. “It is where the fate of the unity of Jerusalem will be set.”

Minister Bennett made the remarks following the approval of 600 new housing units for Arabs in the neighborhood of Beit Safafa, located on land in southern Jerusalem territories annexed by Israel after the Six Day War in 1967. The new housing units will further connect the Arab neighborhood to Givat Hamatos, also located on southern Jerusalem lands gained by Israel in 1967.

“The goal of the world and the Palestinians is to create Palestinian territorial continuity through Givat Hamatos from Beit Jala to Malha,” continued Minister Bennett.

“We are opposed to such a goal,” Bennett stressed. “We want continuity between Talpiot and Gilo and to preserve the unity of Jerusalem.”

Talpiot is a neighborhood located southwest of Jerusalem’s Old City and Gilo, like Givat Hamatos, is another neighborhood in southern Jerusalem located in territories taken over by Israel in the Six Day War.

Although Israel maintains that Givat Hamatos and Gilo are part of its capital city, many in the international community refuse to accept Israel’s annexation of those neighborhoods or Jerusalem’s status as Israel’s capital city.

Minister Bennett asserted that authorization for Palestinian construction without Israeli construction in such areas would only serve to further divide Jerusalem.

Prime Minister Benjamin Netanyahu has often cancelled or postponed plans to build additional Jewish housing units in neighborhoods like Givat Hamatos and Gilo due to intense pressure from the international community. Jerusalem Mayor Nir Barkat, who also spoke at the conference, insisted that Netanyahu not abide by such a standard, which he implied to be prejudiced against the city’s Jewish residents.

“Building in Jerusalem should not be stopped for no reason,” Barkat asserted. “We need to allow construction within the framework of the work plans of the city of Jerusalem without prejudice.”

“I would argue that it would be a mistake not to allow construction and that it is a mistake to only authorize it after an attack,” continued Barkat.

Israel has often announced construction plans near the site of a terror attack shortly after its occurrence. Netanyahu announced over the weekend that 42 new homes would be built in the Harsina neighborhood of Kiryat Arba, where 13-year-old Hallel Yaffa Ariel was stabbed to death by a Palestinian Arab last Thursday. Critics countered that such a plan was already in the works.

Barkat contended that Israel should insist upon continuing to build sans any discriminatory standards. “The message is to allow construction without prejudice in the city of Jerusalem,” the mayor reiterated.