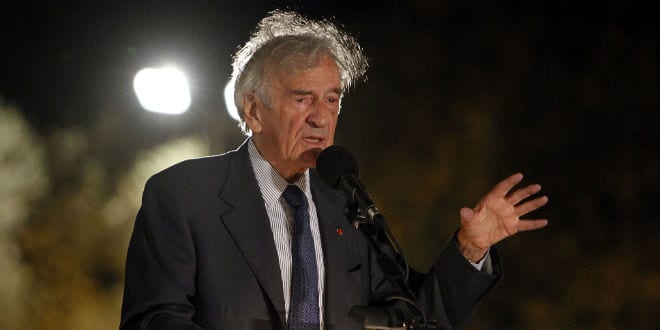 Elie Wiesel, Holocaust survivor, Nobel Peace Prize laureate, and outspoken pro-Israel activist, passed away on Saturday at the age of 87.

A prolific author, he penned 57 books. One of his most memorable works, Night, described his personal experiences during the Holocaust as a teen in the Auschwitz, Buna, and Buchenwald concentration camps. For ten years after the end of the war, Wiesel, refused to write about or discuss his experiences. But in 1952, after a meeting with Chabad Rabbi Menachem Mendel Schneerson, and at the urging of his friend, Nobel Laureate and author Francois Mauriac, Wiesel began to write about the Holocaust.

This led to his writing an 864 page manuscript in Yiddish which he later adapted. The original in Yiddish has been described as an angry account intended for post-war Jews. This transformed into the book, Night, which was published in America in 1960. The literary critic Ruth Franklin writes that the pruning of the text from Yiddish to French transformed an angry historical account into a work of art.With few sales at first, the book has now became a mainstay in Holocaust literature, and has been translated into 30 languages, selling millions of copies.

Wiesel was born in Sighet, Transylvania, located in what is now Romania, on September 30, 1928. When Wiesel was 15,  he was sent into a Jewish ghetto along with the rest of Romania’s Jews. Soon after, he was sent to Auschwitz. Separated from his mother and three sisters, Wiesel went through labor camps with his father, Shlomo. Just a few weeks before Buchenwald was liberated by the Allied forces, Wiesel’s father was beaten badly and sent to the gas chambers. His younger sister and mother were also killed in the Holocaust. After the war, Wiesel was reunited with his two older sisters.

Wiesel was awarded the Nobel Peace Prize in 1986. The prize committee called him a “messenger to mankind,” stating that through his struggle to come to terms with “his own personal experience of total humiliation and of the utter contempt for humanity shown in Hitler’s death camps”, as well as his “practical work in the cause of peace”, Wiesel had delivered a powerful message “of peace, atonement and human dignity” to humanity.

He received many international awards including the Congressional Medal of Honor, the French Legion of Honor, the Star of Romania, an Honorary Knighthood, and the Presidential Medal of Freedom, in addition to numerous honorary degrees.

An outspoken supporter of Israel, he was often criticized for his uncompromising views. In 2010, he wrote full page advertisements in the New York Times and three other newspapers, stating the Jewish connection to Jerusalem and criticizing the administration of President Barack Obama for pressuring Israeli Prime Minister Benjamin Netanyahu to halt construction of housing for Jews in East Jerusalem. Wiesel was criticized by left-wing groups in America and Israel for his statements.