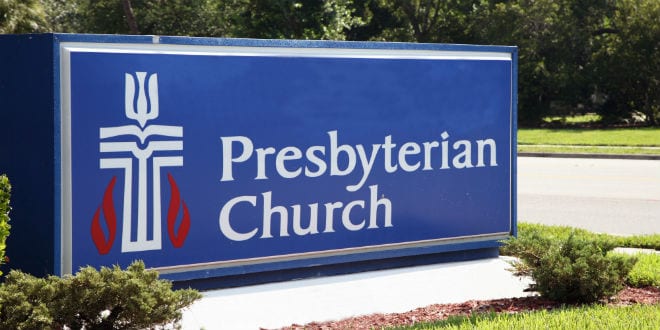 Presbyterian Church USA passed a series of resolutions at its general assembly in support of the Boycott, Divestment and Sanctions (BDS) movement against Israel, while calling on Israel to leave the disputed territories.

Among the measures passed by the Presbyterian Church includes the approval of a report, in a 429-129 vote, that seeks to examine the two-state solution for the Israeli-Palestinian conflict and possible alternatives “including but not limited to that of two sovereign states—Israel and Palestine.” The report says that Israel’s “policy trajectory of continued settlements and brutal occupation” is “deeply troubling.”

“Not only does it make a two-state solution increasingly difficult, if not impossible, to achieve, but the emerging, de facto single state’s systematic violation of Palestinian rights and democratic values is eroding Israel’s moral legitimacy,” the report adds.

Additionally, the Presbyterian Church passed a resolution calling for “prayerful study” of both the church’s support for the BDS movement and opposition to that movement. A third resolution urged the real estate company RE/MAX to stop sales of property within Israeli settlements in the disputed territories. At its previous general assembly in 2014, the Presbyterian Church narrowly passed a resolution calling for divestment from companies doing business in Israel.

The church’s Israel-Palestine Mission Network, which has lobbied for pro-BDS resolutions, praised the “advances made at this year’s General Assembly towards supporting a just and lasting peace in Israel and Palestine.”

“We are deeply disappointed with the Presbyterian Church’s decision to embrace motions which forward arguments in favor of a bi-national state and of the anti-Israel BDS campaign,” said Rabbi David Sandmel, the Anti-Defamation League’s director of interfaith affairs.

Emily Soloff, associate director of interreligious and intergroup relations at the American Jewish Committee, said that a “major Protestant denomination in the U.S. with deep roots in the Middle East has chosen to be a cheerleader for those whose vision of peace does not include the State of Israel.”

The Unitarian Universalists, another mainline Protestant church that held its general assembly last week, also voted on an Israel divestment measure. Despite gaining 54 percent of vote, the measure failed to secure the necessary two-thirds majority needed for passage.