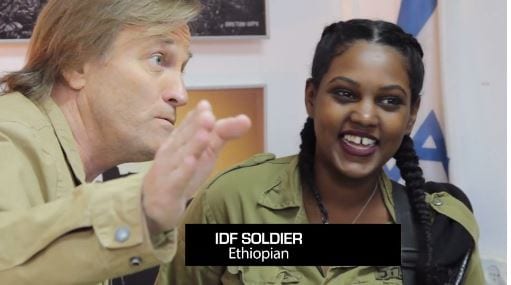 The Christian Zionist organization Proclaiming Justice to the Nations (PJTN) is responding to recent efforts by the Boycott, Divestment and Sanctions (BDS) movement against Israel toward making inroads within the Evangelical Christian community. Last week, the organization screened its film, “Hating Israel: In Search of the Truth Behind BDS,” in Jerusalem launching the organization’s newest project aimed at delegitimizing the BDS agenda.

“The goal is to expose the BDS movement as the latest platform for delivering anti-Semitism,” Laurie Cardoza-Moore, president and founder of PJTN, told Tazpit Press Service (TPS).

Several Members of Knesset, clergy, and business leaders, attended the exclusive screening of the satirical documentary that details the journey of American comedian Brad Stine in his efforts to find the ‘truth’ behind the Israeli-Palestinian conflict.

“(Stine) was raised in a typical Evangelical home,” Cardoza-Moore explained to TPS. “He always knew that we were supposed to support Israel. But he was listening to what the media around the world was saying, accusing Israel of being an apartheid state, persecuting the Palestinians and occupying Palestinian land, and he wanted to know if there was any truth to these accusations.”

“So he decided to go on a journey to find out if there was truth behind what he was hearing,” she said.

The documentary, produced in a satirical faction, depicts Stine’s discoveries during his journey, speaking with experts as well as Israelis and Palestinians on the ground. It begins with a scene in which Stine absorbs all of the content critical of Israel on social media and prominent anti-Israel activists. Before Stine is able to conclude that “maybe the Jews are the problem,” however, a cartoonish “Facts Man” figure shows up on his screen encouraging Stine to view the facts on the ground for himself instead of listening to the press.

“Most of the millennial Christians have bought into the whole social media narrative and we’re finding that a lot of the millennial Evangelical Christians are not following the faith or keeping the traditional faith of their parents,” Cardoza-Moore said to TPS. “They look at the Palestinians as a persecuted people while Evangelical Christians have historically understood and known that Israel is fighting terrorists who are trying to destroy them and wipe them off the map.”

Ultimately, Stine concluded that the BDS case against Israel was rife with inaccuracies. Much of the satire in the film directly ridicules many of the claims made by BDS, such as the charge that Israel is an apartheid state.

Despite the film’s humorous presentation, Cardoza-Moore argues that BDS is a serious concern facing the Evangelical Christian community.

“Unfortunately, the Evangelical Christians are now being targeted by the propagandists and anti-Semites who are accusing Israel of violating Palestinian rights,” she claimed. “And the narrative coming out of the Palestinian Authority as well as from Palestinian Christians like ‘Christ at the Checkpoint,’ or the Bethlehem Bible College, is that Jesus had more in common with the Palestinians. Some go as far as to say that Jesus was a Palestinian and that he was not Jewish.”.

Christ at the Checkpoint, an annual anti-Israel conference held over the last few years at Bethlehem Bible College, has attempted to make inroads within the Evangelical community by inviting a number of international Evangelical Christians. The aim is, according to the group’s website, to “challenge Evangelicals to take responsibility to help resolve the (Israeli-Palestinian conflict)” and to “create a platform for serious engagement with Christian Zionism and an open forum for ongoing dialogue between all positions within the Evangelical theological spectrum.”

“We’re trying to combat their narrative because they are targeting the Evangelical Christian community saying, ‘You should be standing with your Christian Palestinian brethren and supporting us because we’re being persecuted,’” Cardoza-Moore explained. “So it’s very important that we communicate the true narrative to the Evangelical community.”

Meanwhile, members of Knesset met with diplomats, journalists, and organizational leaders at the Knesset on Monday to discuss strategizing the best ways to combat BDS. Gilad Erdan, the Israeli minister tasked with leading Israel’s anti-BDS strategy, called for Israel to go on the offense.

Cardoza-Moore emphasized her intentions to start her own initiative against BDS in Israel.

“We wanted to make sure Israelis know what we’re doing and we wanted to get the blessing and nod from Israelis themselves,” she said.