Pope Francis: “No One Has the Right to Kill in the Name of God”

Home » Pope Francis: “No One Has the Right to Kill in the Name of God” 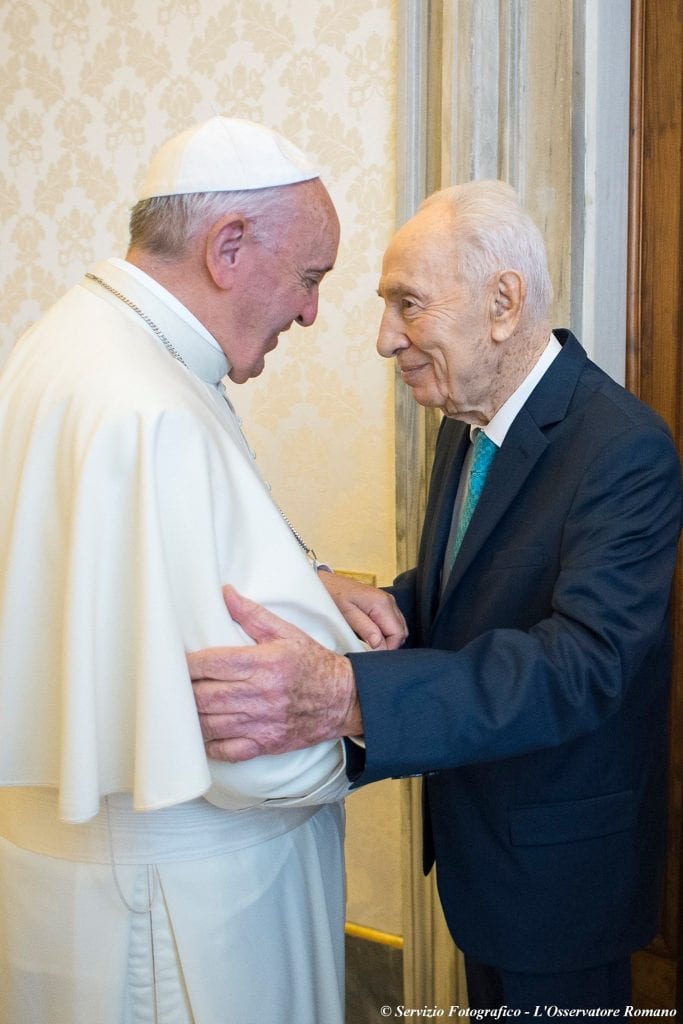 Earlier this week, Pope Francis met with former Israeli President Shimon Peres at the Vatican in Rome. During their brief but cordial visit, the two discussed the recent dramatic rise in terror attacks and affirmed their commitment to raising their voices in peace in the face of “bloodshed and hatred and terror.”

Upon the ex-president’s arrival at the Vatican, Pope Francis embraced Peres and kissed his hand before telling him he was “excited and grateful” that Peres came such a far way to meet with him.

Throughout their meeting, which lasted over an hour, the leaders acknowledged their moral obligation to address and denounce hate related crimes committed by terrorists in the name of religion, such as the recent shootings at the Pulse nightclub in Orlando or at Sarona Market in Tel Aviv.

“You and I see eye to eye on many things,” the Pope said to Peres. “No one has the right to kill anyone or take a life in the name of God.”

According to a press statement from the Peres Center for Peace, an Israel-based organization which works in medicine, education and business, Pope Francis told the frail 92-year-old “Together we will be a voice for peace and for the stopping of the bloodshed, and against hatred and terror in the name of religion.”

Peres thanked the Pope and voiced regret that since the leaders’ last meeting on the Vatican lawn two years ago, “much blood has been spilled in our region and in streets around the world.”

“We are witnessing increased terrorist acts against innocent people [and] the use of the name of God for terrorist fanatics to murder and kill,” continued Peres. “We cannot remain indifferent to tens of thousands of [people] who have been [killed and] wounded and have lost family members and their homes,” the former president said, no doubt referring to the horrific genocide occurring at the hands of the Islamic State in Syria and Iraq.

Peres and Pope Francis then called upon religious leaders of all faiths to work together to eradicate the rapid spread of terror activity for the sake of the next generation. “We have a moral obligation to our children to stop the hatred and bloodshed,” said Peres. “I firmly believe that we must promote peace and morality, livelihood and harmony for the younger generation,” Pope Francis said in agreement.

Peres then took the Pope’s hands in his and said: “The world is blessed that your voice is strong; people listen to you; you bring hope that they can achieve their dreams. Continue using your voice to champion peace and to bring the world to a better place.

From there, the conversation turned towards the Israeli-Palestinian conflict and the lack of progress towards peace. “To my sorrow, there have not yet been direct negotiations with the Palestinians,” said Peres, “and at this moment there are mutual accusations between the two sides.”

Emphasizing his belief in best route to achieve peace between Israel and the Palestinians in a way that will positively influence the future of Israel, the former president maintained “There is no alternative but to return to the table – direct action to promote peace cannot be postponed, and connections between Israeli and Palestinian children are imperative, as they will eventually live here together.”

“The solution is clear – there must be two states for two peoples” Peres declared.

Peres’s rhetoric of direct negotiations is one that Prime Minister Benjamin Netanyahu has reiterated on numerous occasions, especially in the face of the French Peace Initiative which currently aims to enforce a two state solution but will not include Israel nor the Palestinian Authority in the discussions. Appalled by the suggestion, Netanyahu has repeated his objections to the initiative  saying “the only way to advance true peace between us and the Palestinians is through direct negotiations between us and them without preconditions.”