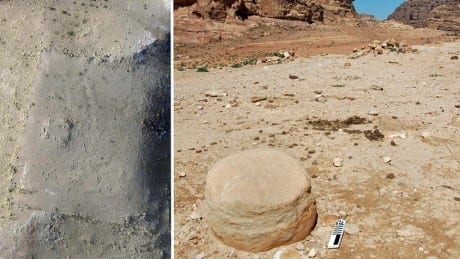 A recent discovery in the Biblical city of Petra used satellites to reveal hidden secrets to archaeologists: a large platform that may have been used for ancient rituals had been hidden in plain sight for thousands of years.

Petra, known as “Sela” in the Bible, is an ancient city in southern Jordan near the Dead Sea. In 2007, it was listed as one of the New Seven Wonders of the World. The city’s structures were carved into the red rock cliffs of Jebel al-Madhabah. Some experts believe this mountain to be Mount Hor, mentioned in the Bible as the burial site of Aaron the Priest.

Petra is believed to have been built as the capital city of the Nabateans in 312 BCE, approximately when Israel came under the rule of Alexander the Great. Abandoned in the seventh century CE, it was rediscovered in 1812 by Swiss explorer Johann Ludwig Burckhardt.

Though archaeologists have extensively surveyed the site, new discoveries are still being made. Though some of the features of the most recent discovery could be seen from ground level, cutting-edge technology was required to understand its true nature.

Archaeologists Sarah Parcak, a National Geographic fellow and pioneer in the field of satellite archaeology, and Christopher Tuttle, executive director of the Council of American Overseas Research Centers, used high-resolution satellite imagery, aerial drone photography and ground surveys to locate the unique double platform, which no archaeologist had studied before.

The base of the platform measures 184 by 161 feet. The second platform, built on top of the base, was originally paved with flagstones and featured columns that supported a staircase. A small building, 28 feet square, stood on the platform, open to the east. The purpose of the platform remains a mystery.

“We know it’s large, it’s significant, it’s important. It probably would have had some kind of a public function,” archaeologist Sarah Parcak told NPR. “Could it be used for religious purposes? Was it some sort of public administrative structure? I wish I knew.”

The Nabateans who built Petra were the descendants of Biblical Edom, which the Bible describes as being the descendants of Esau. Cursed, Edom’s downfall was prophesied in Obadiah, who described its unique cities embedded in the mountain.

O thou that dwellest in the clefts of the rock thy habitation on high; that sayest in thy heart: “Who shall bring me down to the ground?” Though thou make thy nest as high as the eagle and though thou set it among the stars I will bring thee down from thence saith Hashem. Obadiah 1:3-4

Its cliffside dwellings were mentioned again in Jeremiah and its downfall predicted.

And Edom shall become an astonishment; every one that passeth by it shall be astonished and shall hiss at all the plagues thereof. Jeremiah 49:18

This prophecy does seem to have come true, as 600,000 tourists each year come from far away to view Petra’s desolate ruins, now totally uninhabited.

The two references to Petra, called Sela in the Bible (both names mean “rock”), are somewhat perplexing. The books of Obadiah and Isaiah both describe Sela as a mountaintop city, similar to other Nabatean cities. However, Obadiah’s references to cities in “clefts of the rock” are identical to Petra’s unique construction.

Let the wilderness and the cities thereof lift up their voice, the villages that Kedar doth inhabit; let the inhabitants of Sela exult, let them shout from the top of the mountains. Isaiah 42:11

Dr. David Ilan, director of the Nelson Glueck School of Biblical Archaeology at Hebrew Union College, noted the discrepancy between the Biblical descriptions of the mountain-top cities of Edom, and the city of Petra, which is situated in a ravine called Wadi Musa (Moses), created by flooding in the rainy season.

“Though Petra is not an ‘eagle’s nest’, it was typical for Nabatean cities to be situated on hilltops,” he told Breaking Israel News, noting that this may explain the verses.  “Petra was a hub for trade, so it would not have been convenient to be on a mountaintop, though other nearby Nabatean cities were.”

Sela, or Petra, was widely known to outsiders, due to its commercial nature. Other Nabatean cities were less well-known, but the nation’s predilection for placing cities on mountaintops was noted descriptively in the Bible.

Rabbi Leibel Reznick, author of several books on Biblical archaeology, explained that Petra does appear in the Bible, oral tradition, and history of Israel.

“The city of Petra derives its name from the Greek word meaning ‘a rock’, and the Hebrew equivalent is the word Sela. The Edomite city of Sela is mentioned in passing three times in the Hebrew Bible.”

“Petra is also mentioned in the Talmud (the oral law). The opening paragraph of Tractate Gittin mentions the city of Rekem, which Josephus (a first-century Jewish historian) identifies as Petra. Indeed, a Nabatean inscription was found in Petra with the city name Rekem.”