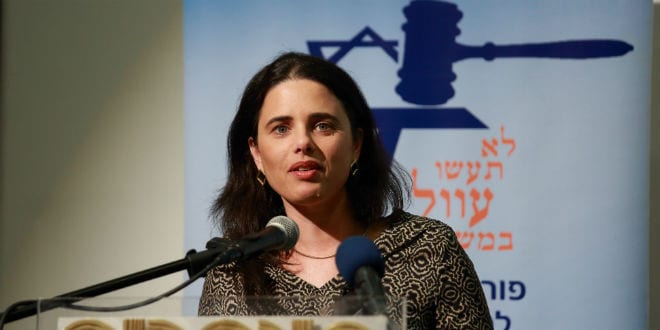 A muscular and controversial new counter-terrorism law, championed by Justice Minister Ayelet Shaked, passed in the Knesset Wednesday by a majority vote of 57 to 16 following a heated parliamentary debate. The law will broaden the definition of what constitutes terrorist activity and is designed to boost the ability of Israel’s security forces and judicial system to contend with the threat of terrorism.

“The attacks in Orlando and Tel Aviv show that now more than ever there is no reason for terrorism. There are [only] excuses,” Shaked said during the parliamentary debate. “Only through appropriate punishment and deterrence can it be beaten. The 2016 terror model received today a 2016 solution.”

The 51-page bill, entitled the “Fight Against Terror Law,” details specific offenses newly defined as terror activity, including tunnel-digging – a clause clearly aimed at affiliates of the Hamas terror group that digs tunnels inside Israeli territory from the Gaza Strip. The incitement statute was also broadened, now criminalizing a direct call to terrorism regardless of the likelihood that anyone will act upon it, whereas previous legistlation only covered cases in which there was “a real possibility” that the incitement would lead to violence.

The law also grants the court the power to convict accused terrorists with witness testimony in absentia if, for example, a witness flees to territory under the control of the Palestinian Authority. Likewise, the law outlines the procedural course for declaring an entity a terrorist organization and expands punitive measures the government can take against terrorists, including asset forfeitures, land expropriations, and the confiscation of homes by order of the defense minister.

According to the language of the law, its purpose is to help ”prevent and thwart terrorist acts carried out by organizations or individuals. It sets legal guidelines in criminal law and administrative law, including by means of special measures aimed at fighting terrorism in general and to help prevent the establishment and activity of terrorist organizations in particular.”

“The law is exemplary. It provides security forces with the power to fight terrorism,” said Nissan Slomiansky, chairman of the Knesset’s Constitution Committee, at the first reading two weeks ago, adding that they had “also inserted balances into the law so that it will be moderate, and it will be implemented only when it will be necessary to do so.”

The anti-terror bill was originally floated in 2011, but never made it through the parliament’s second and third readings. The law enjoyed the support of the predominantly right-wing coalition, but members of the left fear the broad language of the bill will put basic liberties and fundamental human rights at risk.

Zahava Gal-On, chairwoman of the leftist Meretz party, said that the fight against terrorism “must be done effectively and not at the sacrifice of fundamental values.”

Yoel Hasson, a member of the center-left Zionist Union faction in the opposition, expressed favor for the law, saying, “This is an Israeli law that seeks to protect every citizen of Israel.”

“When it comes to terrorism, it does not discriminate between who is sitting at this table and who at the other. You know this well from experience. It’s not an anti-Arab law or a law against Arab citizens. This is a law in favor of citizens of the State of Israel,” Hasson argued.

The law replaces four already existing laws and ordinances on terrorism and amends 14 articles in the law code. As part of the bill, Justice Minister Ayelet Shaked will be required to submit an annual report on the law’s implementation, including the number of cases that end with indictments for terrorism and the implementation of special orders for the detention of people suspected of security-related violations.