NY Governor: If You Boycott Israel, New York Will Boycott You

Home » NY Governor: If You Boycott Israel, New York Will Boycott You 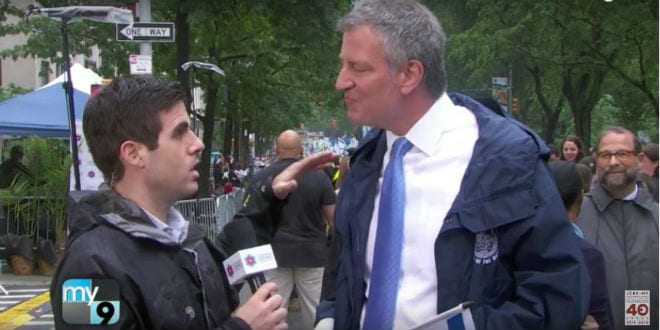 Inclement weather couldn’t keep the state of New York from showing its Israel pride on Sunday, with over 30,000 supporters – including Governor Andrew Cuomo –  joining the annual Celebrate Israel Parade through the streets of Manhattan despite pouring rain.

Just before the parade, Cuomo announced a new pro-Israel initiative to be implemented in New York: a state ban on dealing with companies or organizations that support the Boycott, Divestment and Sanctions (BDS) movement, which seeks to harm Israel through economic means.

I am signing an Executive Order that says very clearly we are against the BDS movement. If you boycott Israel, New York will boycott you.

The executive order requires a list to be drawn up of all businesses that support BDS, either directly or indirectly. Once the list is established, “all executive branch agencies and departments — which make up a large portion of state government — as well as public boards, authorities, commissions, and all public-benefit corporations will be required to divest themselves of any company on the list”, the order read.

The move was met with approval by Israel’s UN Ambassador to the UN, Danny Danon, who said in a press statement, “Governor Cuomo’s announcement is another effective strike against those seeking to harm Israel. America is Israel’s largest and most important ally, and the governor’s initiative emphasizes this special bond.”

New York Mayor Bill de Blasio, who also marched in Sunday’s parade, added, “The residents of New York believe in Israel and we have a deep love for the people of Israel.”

“As long as I am mayor, we will always stand by Israel,” de Blasio vowed.

The day of the parade was overcast, with occasional downpours, but that didn’t stop thousands of supporters from turning up.

“Every act of solidarity matters,” he said firmly.

The parade, sponsored by the UJA Federation of New York in partnership with the state of Israel, featured thousands of marchers from dozens of pro-Israeli organizations, schools and clubs, some famous guests, and musical performances, including house band Soulfarm. The cast of Broadway’s “Fiddler on the Roof” joined, performing renditions of some of their musical numbers.

“It was really great seeing how many people showed up to support Israel, even though the weather was so bad,” marcher Michael Forman, who attended with his wife Amy, told Breaking Israel News. “There was a very nice ambiance of unity and a spirit of joy throughout the parade.”

“We even got to see Kathy Lee Gifford and Senator Chuck Schumer walking by,” added Amy. “It’s just good to know that despite what you see on the news, there are so many Israel supporters out there who want to show the world how proud they are.”

The parade coincided with Jerusalem Day, which commemorates the reunification of Israel’s capital city in 1967. Much like in New York, Jerusalem’s streets were filled with blue-and-white clad supporters waving flags, singing, and dancing in celebration of God’s holy city.