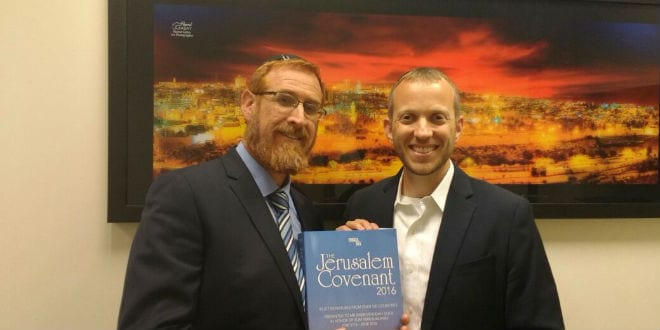 A record 93,000 Christian and Jewish Israel supporters from all over the globe have put their names to a document proclaiming the eternal unity and sanctity of Jerusalem. The document, called the Jerusalem Covenant, affirms that Jerusalem is the one and only capital – both Biblically and politically – of the land of Israel.

The signatures were collected in time for Jerusalem Day, the 49th anniversary of the unification of Jerusalem. On the 28th of the Hebrew month of Iyar during the 1967 Six-Day War, the Israel Defense Forces liberated the Old City of Jerusalem from Jordanian rule, uniting what had been the “divided capital of Israel” since Israel’s establishment in 1948.

Observed this year on Sunday, the 5th of June, Jerusalem Day is a national holiday celebrated with an exuberant outpouring of patriotic pride in the streets of the city, which are closed for singing, dancing, flag-waving and parading.

The Jerusalem Covenant was originally written in 1992 by then-Deputy Chief Justice Rabbi Menachem Elon to commemorate the 25th anniversary of Jerusalem’s reunification. The Covenant is intended as a renewal of the original Biblical covenant between God and the people of Israel, which promises that Jerusalem belongs to the descendants of Abraham.

We have gathered together in Zion, national leaders and heads of our communities everywhere, to enter into a covenant with Jerusalem, as was done by the leaders of our nation and all the people of Israel upon Israel’s return to its Land from the Babylonian exile; and the people and their leaders will dwell in Jerusalem, the Holy City. The Jerusalem Covenant

In 2013, Israeli NGO Israel365, founded by Rabbi Tuly Weisz, launched a project to bring the Jerusalem Covenant to the hearts of Israel supporters throughout the world, offering them the opportunity to express their strong Biblical belief in the Jewish right to Jerusalem. In its first year, the initiative garnered 10,000 signatures; the number has annually doubled ever since, growing from 23,000 in 2014 to over 50,000 signatures last year. This year, the number of signatures reached over 93,000.

Each year, the printed collection of signatures, bound together in a book, are presented to a different member of Knesset. Last year, Israel365 staff presented the Covenant to Speaker of the Knesset Yuli Edelstein. This year, it was presented to MK Yehudah Glick (Likud), the newest member of Knesset and an avowed defender of Jerusalem and the Temple Mount.

“This is so exciting, holding a book with almost 100,000 signatures of people from all over the world who signed their name on the Jerusalem Covenant,” Glick said, adding, “Jerusalem is the city of peace, and here we see the words of the prophets materializing and becoming a reality, all nations coming together and signing the Jerusalem Covenant between God and Jerusalem and the world.”

The auspicious timing of the binding and presentation of the book makes this year’s Jerusalem Covenant more relevant than ever. Though Jerusalem is Israel’s indisputable capital according to millions of Bible-minded Israel lovers throughout the world – and Israel’s own laws – the international community has yet to recognize it as such.

Left-wing movements and proponents of the two-state solution actually look forward to a reversing of Jerusalem’s unification, as such a solution would almost definitely require Jerusalem to be split into Israeli and Palestinian sectors.

“In 1967, Israel captured the Old City of Jerusalem in less than 48 hours. Now, 49 years later, it’s still not fully ours,” Rabbi Weisz told Breaking Israel News. “The Bible states clearly that Jerusalem is the spiritual heritage of the Jewish people, given to us by God. Now that we have a state, it’s obvious that Jerusalem must be its capital. However, in the eyes of the world, Jerusalem is still not recognized as our capital city – not in terms of the Bible, and not in political terms either.”

“Just last week, American President Barack Obama signed an order delaying the move of the US embassy from Tel Aviv to Jerusalem,” he continued. “If there were ever a time when Israel’s Christian supporters must stand with Israel and Jerusalem, it’s now.

“Signing the Jerusalem Covenant gives Israel’s supporters a chance to make their voices heard, and to tell the world that Jerusalem is, and always will be, the Biblical heritage of the Jewish people.”