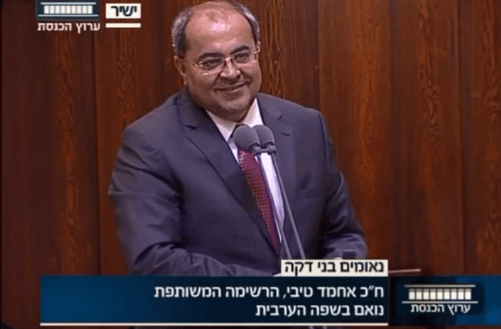 Tuesday was “Arab Language Day” in the Knesset. In an effort to acknowledge the day’s importance, Arab MK Ahmed Tibi took to the podium, enlightening fellow Knesset members to the peril that awaits any Jew who does not speak the distinguished language, The Jewish Press reported.

Tibi began his speech by talking in Arabic before switching to Hebrew. After receiving some chuckles in response, he attempted to inform his illustrious audience that fellow MK Taleb Abu-Arar taught him earlier that morning “in heaven, the spoken language is Arabic, and if the Jews want to go to heaven, they need to take this into account.” So, he advised, “start learning Arabic gentlemen, or you’ll go somewhere else.”

Knesset Speaker Yuli Edelstein quickly retorted, “It does sound like heaven. No one there will bother me, since I don’t understand Arabic,” instigating bursts of laughter.

Though the crowd’s laughter may have indicated all was said in jest, Breaking Israel News tried to learn more to see if there was any validity to Tibi’s teaching with Islam.

Dr. Abdel-Ghafar Hilal, the dean of the faculty of the Arabic language in the Azhar University located in Cairo, explained in a study published by The Arab West Report that some scholars studying the “purity” of the Arab language believe Arabic is the origin of all language and was even spoken by the first man. “All languages had generated from one origin that is the Arabic language, which was the language of Adam,” he said.

But the facts of history come to dispute this as the earliest recorded usage of a language somewhat resembling modern Arabic was in the 4th century BCE, hundreds of years after the time of Adam. What’s more, evidence collected by archaeologists, historians, and etymologists alike collaborates the theory that Arabic is not an original language but developed over time, borrowing features from several different Arabian alphabets to create the written Arabic used throughout the world today.

Clarifying the uncertainty behind the spoken language in heaven, said Dr. Hilal, “We cannot say for sure that the Arabic language or any other language is the language of the people of paradise. Neither the Qur’an nor the Sunna gives us a clear-cut evidence in that respect.”

Strongly disputing the Arabic theory, Genesis Rabbah, a Jewish text of rabbinical interpretations on the Bible, teaches that Adam spoke Hebrew, as evidenced by the names he gave to Eve: Isha (woman) and Chava (mother of all living creatures).

Furthermore, Hebrew is recognized by many as the Divine language with which God created the world and even superceded all language spoken by man.