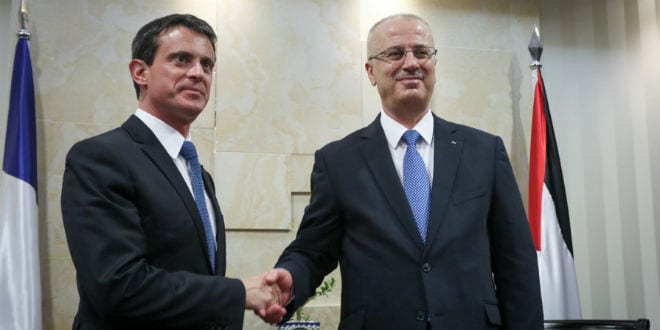 “Time is short,” Hamdallah said Tuesday. “[Prime Minister Benjamin] Netanyahu is trying to buy time… but this time he will not escape the international community.”

The PA prime minister was speaking during a meeting with French Prime Minister Manuel Valls, in the region to drum up support for the French plan. Valls arrived Sunday and met with both Israeli and Palestinian representatives to discuss the matter.

While the Palestinians favor the French peace initiative, which would see foreign ministers of 20 countries meet in Paris on June 3 in an attempt to resolve the matter without either Israeli or Palestinian representatives present, Israel has consistently maintained that only direct negotiations are a viable means to achieving the desired outcome.

On Monday, Netanyahu accused the PA of using the French summit as an excuse to avoid direct talks with Israel.

“The Palestinian Authority does not see the French initiative as an inducer for negotiations, but as a way to avoid them,” he said.

Instead, Netanyahu offered, he would meet with PA Chairman Mahmoud Abbas face-to-face, “in Paris or wherever”, and “every difficult issue will be on the table.” No international mediation required.

Valls expressed support for the idea of direct talks, saying he would take the matter to French President Francois Hollande.

According to the French plan, following the June summit, another meeting, this time with Israel and the Palestinians present, would be held in the fall, intended to restart the process of negotiation which stalled in 2014, when a US peace initiative failed.