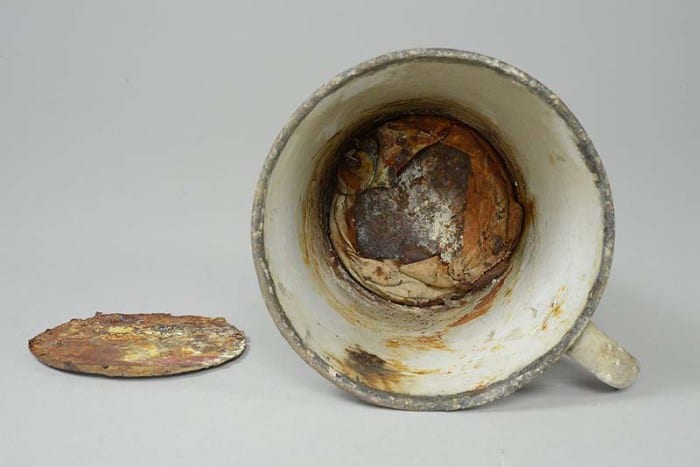 “During the works to secure the enameled kitchenware located at the main exhibition, it turned out that one of the mugs has a double bottom,” Auschwitz Museum employee Hanna Kubik said. “It was very well hidden, but due to the passage of time, the materials underwent gradual degradation, and the second bottom separated from the mug.”

“Under it, among other objects, was a woman’s ring made of gold and a necklace wrapped in a piece of canvas,” Kubik added.

Despite the passage of more than 70 years since the liberation of the camp, there are still cases of accidental discovery of objects hidden by the victims, museum officials say. “The Germans incessantly lied to the Jews they deported for extermination,” said museum director Dr. Piotr M. A. Cywiński. “They told them about resettlement, work and life in a different location. They allowed the victims take with them a little luggage. In this way, the Germans were confident that in the luggage — including clothes and items needed for life — they would find the last valuables of the deported families.”

“The hiding of valuable items — which is repeatedly mentioned in the accounts of survivors, and which was the reason for the ripping and careful search of clothes and suitcases in the warehouse for looted items, the so-called ‘Kanada,’ proves on the one hand the awareness of the victims of the chance of being robbed during the deportation, but on the other hand it shows that the Jewish families still had a ray of hope that these items would be required for their livelihood,” Cywiński noted.

All findings are carefully documented and secured by the conservators, because they are the most recent traces of individual victims of the camp. Unfortunately, quite often the owners of these items remain anonymous, because there are no traces left on the objects to help identify them.

In the Auschwitz-Birkenau State Museum collection there are more than 12,000 pieces of enameled kitchenware: cups, pots, bowls, kettles, jugs, and crockery decorated with images of children playing and images of animals.