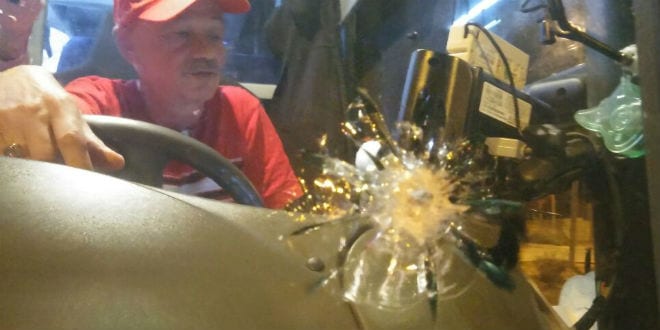 Palestinian terrorists shot at an Israeli school bus full of teenagers on Saturday night near the community of Tekoa in Gush Etzion, south of Jerusalem. Damage was caused to the windshield but “miraculously there were no injuries,” said the local paramedic organization Hatzalah. The shooters drove off and escaped.

According to an initial investigation, a Fiat Punto overtook the bus – which was transporting about 50 tenth-grade boys from the local Makor Chaim high school – as a terrorist opened fire from the passing car. One bullet damaged the front windshield, the IDF said.

“The person next to the driver in the car in front of us leaned out of the car with his head and chest, and fired with a long rifle toward the bus,” said Uriel Fluss, the students’ supervisor who was in the bus at the time, in an interview with Tazpit Press Service (TPS). “We told everyone to duck – we understood it was a terror attack.”

After an initial panic, Fluss said, the students “calmed down when they saw that everyone was okay.”

“The biggest luck was that the bullet didn’t hit the driver, since the bullet that struck the windshield was directly in front of his chest,” Fluss told TPS. “If the bus was not armored the driver would not be with us.”

The IDF began canvassing the area for the assailants immediately after the attack. One soldier was lightly wounded in his face after being hit by a rock during a sweep in the Palestinian village of Sa’ir, near Hebron.

The terrorists have not yet been found and the search is ongoing.

This was not the first terror attack to target students of Makor Chaim high school. Naftali Frenkel, Gilad Shaer and Eyal Yifrah – three teenagers who were kidnapped and murdered by Hamas members in the summer of 2014, an incident that set the stage for Operation Protective Edge in Gaza – all studied at Makor Chaim.

Following the shooting Saturday night, the students held an emotional meeting with their mentors.

“We all gathered with the teachers and rabbis to express gratitude for the miracle and to emerge from this stronger,” Fluss told TPS.