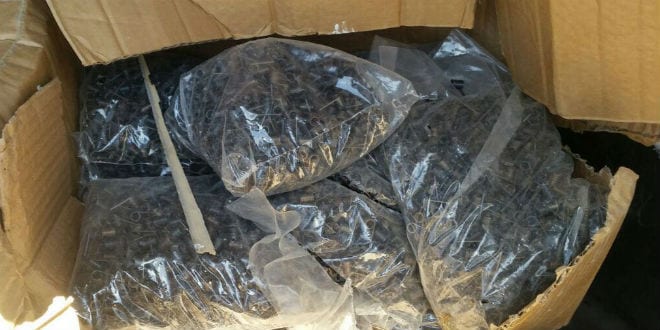 Israeli police have seized pipe bombs, ammunition, and thousands of springs for grenades and rockets in two separate raids over the past day, thwarting plans to attack Israelis both within Israel and from the Gaza Strip.

The suspected pipe bombs and ammunition were found during a search of a house in the Israeli-Arab town of Qalansuwa, located in central Israel, the police announced on Thursday. The objects were seized and the residents, a 25-year-old man and a 32-year-old woman, were arrested and are scheduled to appear in court in Petach Tikva on Thursday.

Meanwhile, the police and Shin Bet announced on Wednesday that they thwarted an attempt to smuggle 60,000 spring kits for hand grenades, mortars, and rockets into the Gaza Strip. The springs were loaded onto a car by a man in his twenties from the Bedouin town of Rahat, after he “fraudulently” purchased them from an Israeli factory that works with the military. The materials were hidden in a warehouse in the community of Ami’oz, near the Gaza Strip.

According to the police, the man was planning to smuggle the springs into Gaza to be used by Hamas and other local terror organizations. He allegedly planned on smuggling 500,000 springs in total, the police said. He has been arrested, along with two other suspects, and taken for questioning.

“Had the smuggling attempt succeeded, the springs would enable the terror organizations to produce 60,000 hand grenades, mortars, and rockets to be used against Israeli citizens,” said a police spokesperson. “Our activities against the attempts to smuggle weapon parts and materials into Gaza through the Erez and Kerem Shalom crossings are ongoing.”

“This is another blow to Hamas’s enormous efforts to produce weaponry while it abuses Israel’s humanitarian aid to Palestinians in Gaza,” said Ofir Gendelman, the prime minister’s official spokesman to the Arab media.