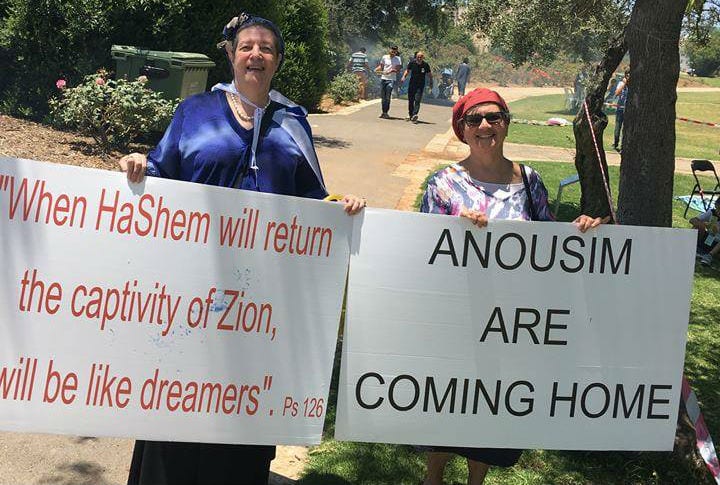 Israel Independence Day was marked last week with large celebrations and fireworks, but small rallies held around the world, easily overlooked, may have signalled the beginning of a great change for the Jewish people: the return of millions of Bnei Anousim.

The “crypto-Jews”,  or Bnei Anousim in Hebrew, are descendants of Jews who were forcibly converted in Spain and Portugal during the Inquisitions in the fourteenth and fifteenth centuries. At the time of the Inquisitions, Jews made up 20 percent of the population of Spain and Portugal but only about half a million fled during the  subsequent expulsions. Those who remained were forced to convert. Many maintained a covert connection to their Jewish roots through cryptic family traditions and are just now beginning tentative steps to re-establish their spiritual and genealogical identity.

The rallies were organized by Ezra L’Anousim (“Help to the Anousim” in Hebrew), an organization started by Batya Yaffa Dacosta, a returned Jew, to help crypto-Jews reconnect to their Jewish roots. The organization offers a platform for crypto-Jews to connect to each other in their journey back to their spiritual roots.

Acknowledging this national identity had special meaning for the groups of emerging crypto-Jews who gathered together in over 40 cities around the world on Israel’s Independence Day last week to show support for the state. The turnout was admittedly modest but participation at the rallies was visibly enthusiastic . The small groups represent the vanguard of a much larger movement that can only continue to grow. The cause is important and the number of people affected is in the millions.

This religious identity took on a nationalistic dimension with the creation of the modern State of Israel, which in many ways enabled the Bnei Anousim to finally reconnect with Judaism. Dacosta explained that Israel provides a focal point for Jews to come together, a necessary aspect of the return of the Bnei Anousim.

“The reason for the rallies was so that these people who have had to live a secret life for so long should know that they are not alone,” DaCosta told Breaking Israel News. “There is an incredible awakening going on but some of the people are so afraid to come out publicly because of all the fear that has been passed down.” DaCosta compared it to the experience of Holocaust survivors, who were suddenly turned on by their neighbors. “The difference is that this has gone on for 500 years.”

DaCosta said that many of the Bnei Anousim want to come live in Israel, expressing a preference for settling in the Negev, the southern area of Israel, as an enactment of the prophecy in Obadiah.

Recent awareness of the plight of the Bnei Anousim has led to the creation of several organizations to help the Bnei Anousim connect with the Jewish People. Shavei Israel, the largest of these organizations, has been working with Bnei Anousim for over a decade. Its Spanish language guidebook for crypto-Jews has been distributed to tens of thousands for free and future editions in Portugese, Italian, and English are planned. Reconectar is a website that helps people on any level they choose, whether it is to reconnect with Judaism, or just to learn more about their own heritage.

DaCosta plans on having a global rally every year on Israel’s Independence Day. She compared it to the beginnings of the movement that opened the doors for millions of trapped Jews to leave the former Soviet Union, though the return of the Bnei Anousim has far more potential for the Jewish people. Recent genetic studies have shown that the return of the Bnei Anousim could increase the number of Jews in the world four times over.

Dacosta insisted that these first steps towards raising awareness are essential. She has high hopes for more people around the world to discover their Jewish roots and joining in future rallies. “There is really a great anousim awakening going on, and it is only just beginning.”