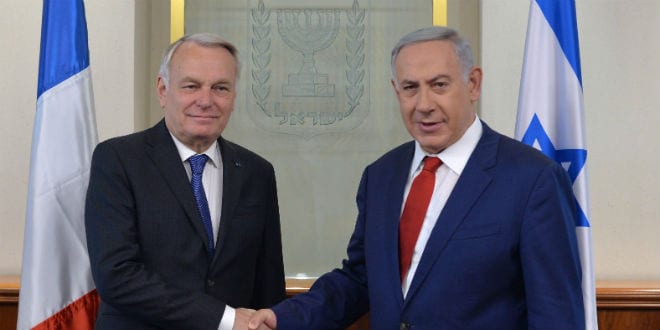 French Foreign Minister Jean-Marc Ayrault vowed not to give up on the upcoming international peace conference in Paris, speaking in a press conference at Israel’s Ben Gurion Airport on Sunday.

“We are not giving up, nor are our international partners,” Ayrault said. “Netanyahu says he wants only direct negotiations, but this option is stuck.”

“The status quo is a temptation but a dangerous temptation. There is a need to act before it is too late to restore hope,” Ayrault added.

Earlier in the day, Prime Minister Benjamin Netanyahu met with Ayrault and repeated his objections to the French international peace initiative, which will take place without Israeli or Palestinian participation.

“Our historical experience has shown that only in this way did we achieve peace with Egypt and Jordan,” continued Netanyahu. “Any other attempt only makes peace more remote and gives the Palestinians an escape hatch to avoid confronting the root of the conflict, which is the non-recognition of the State of Israel.”

“There is a threat that stems from the lack of dialogue, the continued construction of settlements and violence against the populations of both sides,” argued Ayrault. “So there is a need for the international community to encourage a return to talks.”

“Israel’s security is at the heart of the concerns of France. I said to Netanyahu that Israel has the right to live in peace and security alongside a Palestinian state,” Ayrault said. “I came with a clear message, that the friendship towards Israel is always in my heart.”