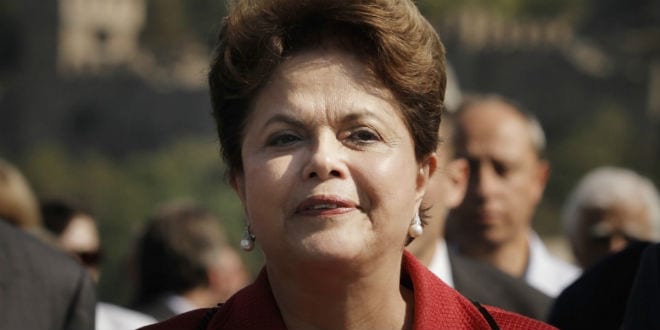 Brazil’s Senate on Thursday morning voted to impeach and suspend President Dilma Rousseff, who will now face a trial for the 2014 illegal manipulation of the country’s finances in order to conceal the burgeoning deficit ahead of the elections. The Senate voted to suspend Rousseff by a 55 to 22 majority, in a 20-hour session that lasted through the night. Rousseff’s Vice-President Michel Temer will replace her a president during her trial. It is expected that the trial will last about six months, which will preventing the disgraced Rousseff from presiding over the Olympic Games in Rio de Janeiro, which start on 5 August.

Rousseff had gained much negative press in Israel when she chose, on the advice of Israeli Arab MKs and Labour MK Tzipi Livni, to refuse the accreditation of Prime Minister Benjamin Netanyahu’s choice for Israel’s ambassador to Brazil, Dani Dayan, because the latter resides in Judea and Samaria.

Back in January, Dayan tweeted bitterly, “14 MKs labored indefatigably against my appointment in Brazil: 13 Joint Arab List members and one Tzipi Livni.” The snub was an unprecedented show of rudeness on the part of the leftwing Brazilian president, who may now be facing her own change of legal residence.

MK Yousef Jabareen (Joint Arab List) met with the Brazilian ambassador in Israel and delivered a personal message to President Rousseff: “I told the ambassador we represent about one fifth of the citizens of the state who object to the appointment,” he told Ma’ariv.

The PA former minister Saeb Erekat told a Brazilian paper that accepting Dayan would mean Brazil cooperates with apartheid and colonizing. Erekat said “Dayan is an illegal settler, whose job is to justify the criminal colonizing of Palestine by Israel.”

But, judging by his tweet, Dani Dayan did not begrudge Erekat or the Arab MKs their objections, although it should raise eyebrows when the loyal opposition is advocating with a foreign power to obstruct the government’s foreign policy. Dani Dayan was bitter and hurting over what he knew to be Tzipi Livni’s working behind the scenes to torpedo his appointment.

Livni justified President Rousseff’s rejection of Dayan, saying it wasn’t personal but an expression of the Brazilians’ rejection of Israel’s settlements policy. Dayan suspects that Livni went out of her way to convince the Brazilians to stand firm in their humiliating rejection of an official foreign dignitary. Livni was ousted by Netanyahu when, as his chief peace negotiator, she pursued unauthorized meetings with the PA delegation.

Rousseff, who became president in January 2011 and began a second term in 2015, has called her impeachment a “coup,” and made a last-ditch appeal to the Supreme Court to stop it — but was rejected.

This is also the end of the 13-year rule of Brazil’s Workers’ Party.