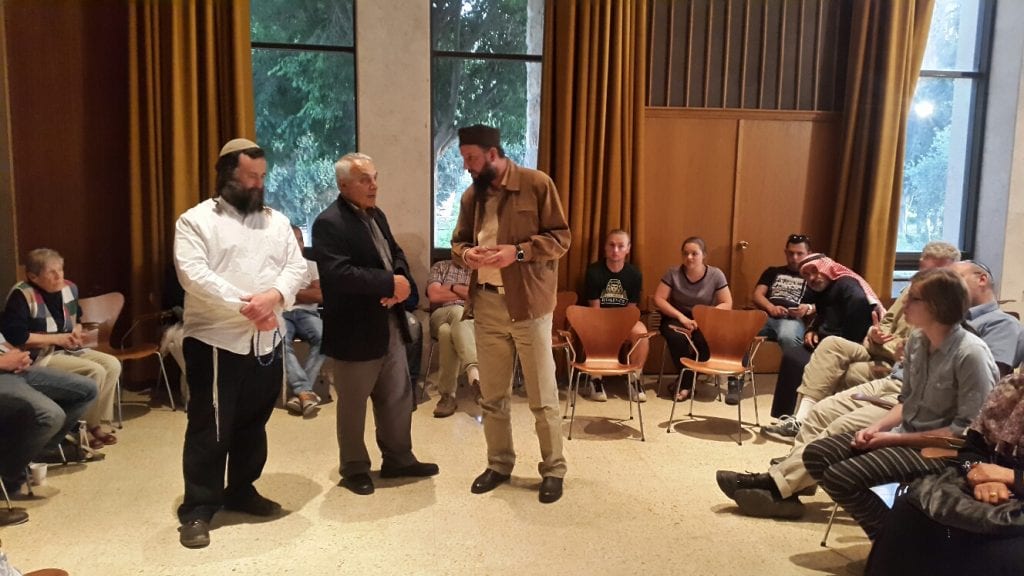 On Monday, a group of 130 Christians, Jews, and Muslims gathered in Jerusalem to fulfill its purpose as house of prayer for all nations. Their prayers were an act of defiance in the face of physical threats, demonstrating how prayer is a powerful tool to drive away evil and violence.

The multifaith group joined together in prayer at the Tantur Institute for Ecumenical Studies, which stands symbolically on the border between Jerusalem and Bethlehem. The gathering was one of the monthly prayer meetings organized in Jerusalem by a coalition of the Elijah Interfaith Institute, Abrahamic Reunion, the Interfaith Encounter Association, and Tantur. This particular event was auspicious, being the first time in a year that all three religions have answered the call to pray together.

Muslims have been absent from these monthly gatherings which began after last May, when the ninth annual multi-faith Jerusalem hug was attacked. The Israeli authorities had issued permits for 250 Muslims from Judea and Samaria to join the event. As the Jews, Christians, and Muslims gathered at the grassy area between the Damascus Gate and the New Gate, the Muslim participants were assaulted by a group of fellow Arabs belonging to the anti-normalization movement. Several of the Muslim participants of the Jerusalem Hug were hospitalized, including a young mother who nearly lost her baby.

Anti-normalization is a movement which opposes any peaceful contact between Jews and Arabs.

“Politics and the peace process have gone nowhere. ‘Praying together in Jerusalem’ creates a space where Jews, Christians and Muslims can come together in a powerful and meaningful way. Public prayer, where we demonstrate our shared faith in the Creator unites us, in contrast to politics, which divides.”

“The unfortunate reality is that our Muslim partners have been afraid to join us at previous monthly prayer gatherings at the Jaffa Gate, because of the ongoing threat of violence by anti-normalization thugs at any public event near the Old City. Anti-normalization, which shares the same roots as the BDS movement (Boycott Divestment Sanctions) attempts to keep us apart,” said Eliyahu Mclean, founder of the Abrahamic Reunion and an organizer of the prayer event. “They want us to separate and delegitimize positive interaction with Israelis.

Since the attack, Muslims have been unwilling to participate in the monthly prayer event in Jerusalem. Father Russ McDougall, Rector of Tantur, offered to host this month’s event at a Christian site, creating a safe environment and allowing Muslims to rejoin the multi-faith prayer gathering. Over 130 people participated, far more than the organizers originally anticipated, indicating that, despite the violent opposition, there is still a great  desire to come together in prayer.

The participants divided into groups facilitated by a member of each faith to discuss the concept of prayer. Rather than accentuate differences, Mclean felt it revealed the deep similarities that bind the three Abrahamic religions.

“I learned from Ramallah Sheikh Abukhalil Tamimi how prayer helps him get closer to God, and though expressed in different terms, it has helped me in my Jewish prayers,” said Mclean.

The groups then separated, each faith praying in a separate part of the facility, the Muslims facing  Mecca while the Jews faced the nearby Temple Mount. At one point, the Jews’ responsive answers to the Kaddish section of their prayers were interspersed with the Muslims answering ‘Amin’, while the halls echoed with Christians singing psalms.

The Muslim presence was especially appreciated since they were most threatened. Their prayers were led by the Imam of the Bedouin town of Tel Sheva, Sheikh Khalil Albaz, who has worked for many years to bring peace between Jews and Muslims, even accompanying Mclean on an interfaith journey to Auschwitz. After his wife, Sanaa, became the first Bedouin woman invited to light the national torch at the 60th annual Independence Day celebration at Mount Herzl, their house was firebombed.

As the event ended, each faith led a song from their tradition. Rabbi Alon Goshen-Gottstein, director of the Elijah Interfaith Institute, led everyone in a moving rendition of Rabbi Shlomo Carlebach’s song, singing, “May God spread his covering of peace, compassion, and life upon us.”

“We want to change the image of religion from one of competition to one that brings us together with all people turning to one God,” Rabbi Goshen-Gottstein said. “It is a very simple thing. Each person prays in the presence of the other, affirming the presence of the other, indicating a willingness to live together in peace. In this sense, it was a hugely successful event.”

Sheikh Abdel Salaam Manasra, a young Sufi Muslim from Nazareth, is Mclean’s partner in Abrahamic Reunion. As the Muslim representative, he was he was intensely aware of the threat and has been physically beaten for his participation. Despite this experience, he does not blame any specific group for the violence.

“The extremists are all one. Extremists from both sides hate peace. They hate those who love Jerusalem,” he stated calmly. “God created me to bring peace. How can I be afraid? God loves all men. If love is from God, it must be stronger than hate.”

Manasra remains strong in his belief that prayer is the solution that  will allow all the Abrahamic faiths to live in peace.

“Prayer changes the man by connecting him to his creator, making him stronger. A real connection with God, true prayer, cleans the heart of all hatred. We say in Sufi, if you want to know God you need to know yourself. How do you know yourself? By seeing yourself in the eyes of another.”