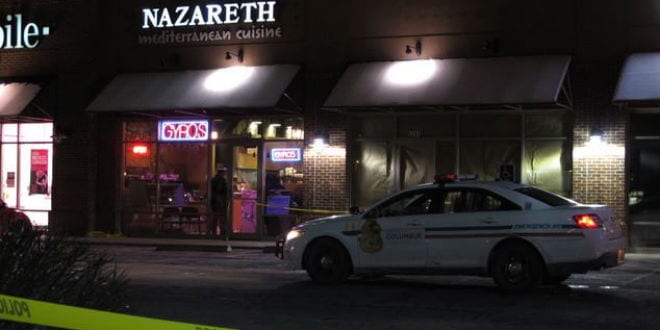 The Israeli Christian restaurateur from Ohio whose place of business was attacked earlier this year has been motivated by the experience to become an informal ambassador for his birth country, reports the Times of Israel. Hany Baransi has decided to step back from the day-to-day affairs of the Nazareth restaurant in Columbus, Ohio to devote his time to supporting Israel.

“I am going to fight hatred against Jews and Israelis. My daily job will be to give speeches and meet with church and charity groups to educate them about Israel, so people get the facts straight,” he said. And while he’s never really thought about it before, he’s trying on the title of “Zionist”. “If being a 100 percent supporter of Israel means I am a Zionist, then I guess I am,” he proffered.

On February 11, a machete-wielding assailant entered Baransi’s restaurant and began attacking customers. Four were injured, including one critically, but all have since, thankfully, recovered. The attacker, 30-year-old Mohamed Bary, was known to the FBI for his radical Islamist statements. He was killed during the incident when he threatened police with his weapon.

Although he had never received any death threats, Baransi is sure he was the target. According to his employees, Bary had entered the restaurant about half an hour prior to the attack, inquiring about the owner’s nationality. When told he was Israeli, Bary allegedly left, returning with his machete.

“I am sure it was an assassination attempt. I was the target. Why else would the Nazareth have been targeted? It wasn’t a random attack. Mine is the only restaurant in Columbus that displays an Israeli flag,” said Baransi.

While he has lived in the US since 1983 and has not visited his birthplace in about nine years, Baransi says he is still Israeli first.

“I’m an American Israeli Christian Arab. My being Israeli comes first,” he said.

Rattled by the events of February, Baransi returned to visit the one place he knew he would be understood: his home town of Haifa, known as a model of Arab-Jewish coexistence.

“I was angry and giving off negative energy. I’ve been dealing with the thought that somebody could have died because of me,” he explained.

“I am feeling better now. It’s good to be around Israelis who understand what being the victim of terrorism is like. We are Israelis. We are resilient.”

Baransi has returned to the States with a renewed sense of purpose. While he has been speaking to school groups about Israel for many years and was even invited to attend this year’s AIPAC policy conference in March, he plans to devote more time and energy to spreading the good word about Israel. One event already in the works is the restaurant’s first-ever Israeli Independence Day celebration, for which he partnered with pro-Israel and Jewish groups.

Despite his experiences, he’s not worried about security for the event. “We’ll let God take care of us, just as He always has,” he said.