President Rivlin: We Will Continue to Survive and Battle Anti-Semitism

Home » President Rivlin: We Will Continue to Survive and Battle Anti-Semitism 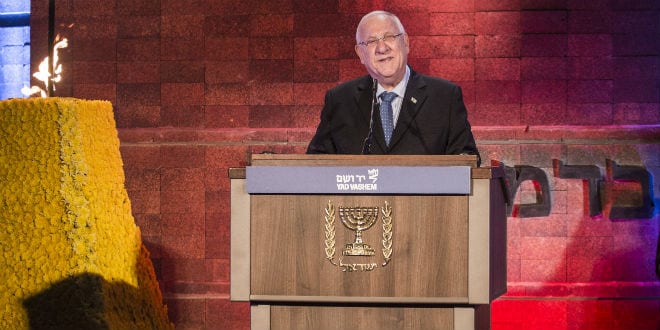 President Reuven Rivlin said that the Holocaust is central to Israel’s identity and vowed to combat the “chronic disease” of anti-Semitism on Wednesday night during the official ceremony marking Holocaust Remembrance Day at Jerusalem’s Yad Vashem Holocaust Museum.

“The Holocaust, whether we like it or not, has become a factor in shaping the standards of our understanding of ourselves, of understanding our relationship with other nations, and our role in the world,” Rivlin said. “The Holocaust places the Jewish people before basic principles, as a people and as a nation gazing inward at ourselves and outward toward all of humanity.”

Rivlin stressed, however, that the founding of the State of Israel was no redress for the Holocaust.

“The State of Israel is not, under any circumstances, compensation for the Holocaust,” he said. “However, the Holocaust put into perspective the necessity and crucial need of the Jewish people to return to its historical roots, as a nation that takes its fate in its hands.”

Rivlin emphasized that Israel not only allows the Jewish people to take control of its own destiny, but also allows it to defend itself as a collective against the continuing phenomenon of anti-Semitism.

“Anti-Semitism and the persecution of the Jews are not a fad, or something that can be taken lightly,” Rivlin noted. “It is a difficult, chronic disease that penetrates deep into the heart and history of nations.”

“The State of Israel will deal with this anti-Semitism by ensuring, first and foremost, a national home and a Jewish army that protects the nation of survival,” added Rivlin. “We are a nation that has survived and will continue to survive thanks to our resilience and strong spirit.”

Rivlin also addressed the Holocaust survivors attending the ceremony, asking for their help in extracting the meaning of the tragedy and lessons to be learned.

“These are the years in which we should take the opportunity to try to clarify along with you how you want to shape the memory of the Holocaust and its lessons for future generations,” he said. “The number which was tattooed onto your flesh is etched into the hearts of this nation for generations and has become the living will of the Jewish people.”