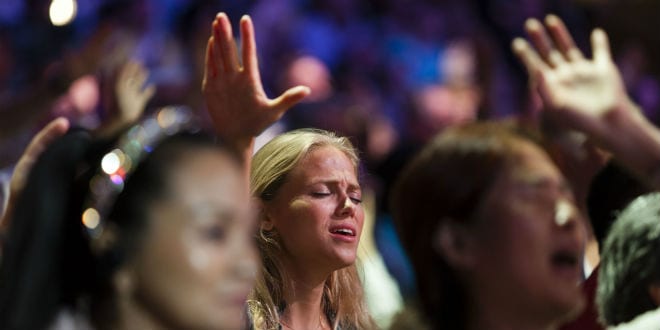 Evangelical Christians are among the most significant supporters of Israel and the Jewish people worldwide, but there’s an unexpected catch: they often feel their efforts are greeted by begrudging acceptance, criticism, and sometimes even open contempt by the Jews whom they are trying to help. Many Christians have begun to question whether this new vision of Jewish-Christian relations will succeed or whether the two religions are destined to slide back into the hatred and distrust that has separated them for a millennium.

The Victory Christian Center in Tulsa, Oklahoma sponsors “A Night to Honor Israel” every year which raises significant amounts of money for Israel. The Center also partners with a local synagogue to help the local Jewish community. One member, Carol Butler, leads a prayer group every week that focuses exclusively on praying for Jews and Israel. She is motivated by a simple but powerful idea.

“We pray for you because we love Israel and the Jewish people,” she told Breaking Israel News over email.

Despite their good intentions, Butler feels that her prayers and actions are not welcomed by the Jews. She even devotes some of her prayer to resolving this conflict.

“I pray that the Jewish people will one day appreciate our love and concern rather than mistake it for hate and anti-Semitism, which was how Christians and Jews used to relate,” Butler said.

Kellen Davison, the founder of Reconciliation with Israel and co-founder of the Commonwealth of Yisrael project, is working towards reconnecting with Israel through action and prayer. As an extension of his personal practice of several decades, the Commonwealth project organizes a list of hundreds of people from over 20 nations that pray for Israel and Jews. Davison told Breaking Israel News that the most common request from the members is that they pray for “safety for Jews and for the land not to be divided”, as well as “hearts of flesh between Jewish and non-Jewish followers of the God of Abraham, Isaac and Jacob leading to greater spiritual unity and reconciliation”.

For the most part, Davison’s efforts and prayer have been well received by the Jews he connects with, but he has also encountered reticence from the Jewish side. He understands why the Jews have put up this wall between the two faiths, explaining that many of them are afraid Christians will try to “convince them to embrace a non-Jewish belief.”

Kim, a Christian who prefers to remain anonymous, told Breaking Israel News over email that she has been praying for Israel and the Jewish people since she was in college. “I pray for God to protect and bless Israel, especially the people in Judea and Samaria,  usually when international powers are pressuring them to give up land and things like that.” She added, “I’m not sure why I pray for Israel, I just want God to love them, be good to them and give them peace.”

Kim took these values from her Evangelical community, which adhered strongly to the Biblical verse which is the basis for much Christian support of the people of Israel: “I will bless them that bless thee, and him that curseth thee will I curse” (Genesis 12:3). Deeply influenced by religious leaders Pastor John Hagee and Rabbi Yechiel Eckstein, who both work to advocate greater interfaith relationships, she was unaware of any rift between Christians and Jews.  She was shocked when, in her personal contacts with Jews, they criticized her prayers on their behalf.

She said that to her, Jews rejecting her prayers feels equivalent to being cursed by Israel, as described in Genesis – and the consequences of such a curse are serious indeed. “Wouldn’t you be scared if Jews and Israelis were always attributing bad things to you or your faith group, since cursing Israel is a very scary offense in Evangelical beliefs?” she asked. “It seems like they just don’t receive it and would be happier if we supported them quietly, like some unseen force, to the point where they can think they did it by themselves.”

To understand the root of the issues preventing the two Abrahamic religions from allying, Breaking Israel News spoke to Yael Eckstein, Senior Vice President of the International Fellowship of Christians and Jews (IFCJ), and daughter of its founder, Rabbi Yechiel Eckstein. The organization, founded in 1983, was initially criticized for partnering Christians supporters with Jewish causes. IFCJ  is the world’s largest organization of Christians actively working with Jews to support Israel, but Yael explained that philanthropy was not the only motivation that inspired her father to establish the movement.

“He didn’t start the Fellowship as a fundraising organization, but as vehicle to foster and deliver Christian love, care, and support for Israel,” she said.

Breaking Israel News asked Eckstein how her father’s efforts towards this end were received by the Jewish recipients of Evangelical support.

“We’ve definitely seen resistance from the Jewish community. My father was ostracized for the once-radical thought that Christians could become Israel’s greatest friend.” She added optimistically, “It’s amazing to see how far both sides have come towards normalizing that concept. The Jewish world is learning that a Christian can love Israel without wanting to missionize or convert Jews.

“We are finally at the point where Jewish organizations say they are willing to accept donations from the Fellowship, but we really need to do more. We need to reach out in return to the Christian Zionists who stand with us. We need to accept that Christian Zionists are a strategic partner in Israel’s future, if we are to have a future in the Mideast,” she asserted.