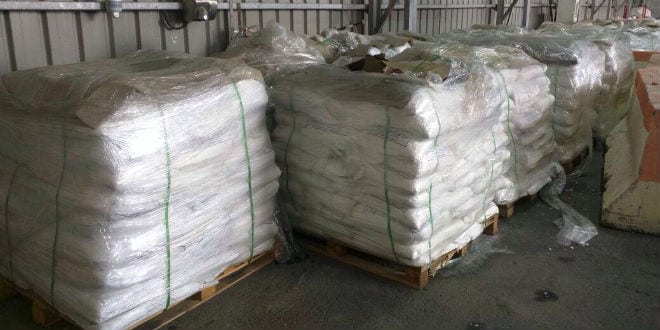 Israeli authorities have seized four tons of ammonium chloride – a key component of long-range rockets – being smuggled from Egypt into Gaza, the Shin Bet cleared for publication on Tuesday. According to a statement by the Israeli Tax Authority, the substance is used in the production of long-range missiles and four tons of it are enough to produce hundreds of missiles.

The smuggling attempt was caught at the Nitzana customs terminal about a week before Passover, inside a shipment marked as containing 40 tons of salt. According to the Shin Bet, the importer is a Gaza resident with ties to Hamas’ Military Wing activists.

“A thorough inspection by the customs inspectors revealed suspicious findings,” read the statement by the Tax Authority. “Bags containing four tons of ammonium chloride were concealed inside the shipment. Ammonium chloride is classified as a dual-purpose material, and its transferral to Gaza requires a license since it may be used by Hamas or Islamic Jihad to produce long-range missiles.”

The statement said that the large amounts of salt ordered into Gaza recently sparked the Shin Bet’s suspicion that the salt shipments were being used to smuggle chemical substances to the rocket production industry in the strip.

The Shin Bet is “convinced” that the substance was intended to be used by Hamas to produce missiles. “This incident reflects the attempts by terror organizations in Gaza to smuggle dual-purpose materials for the purpose of self-armament, while disguising it as goods intended for the civilian population and for reconstruction projects,” read the statement.

The Gaza Strip was seized by the Hamas terror group in 2007, and has since been under a blockade imposed by Israel and Egypt to prevent weapons smuggling.

Dozens of similar smuggling attempts of banned materials and products suspected to be intended for terror organizations have been previously thwarted at the Gaza border crossings. These include sulfuric acid, diving equipment, sulfur rods, rocket-thrust material such as polyurethane, fibreglass cylinders, and special charcoal used as fuel in iron furnaces to process metals.