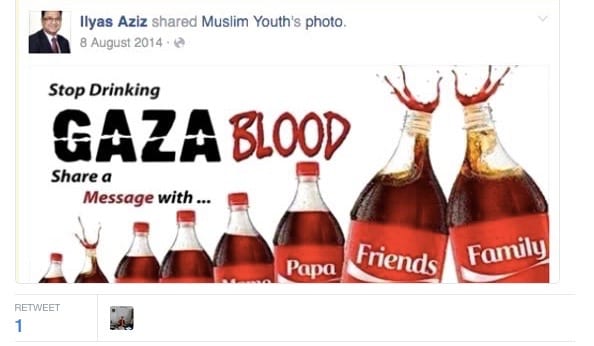 The scandal surrounding anti-Semitism in the United Kingdom’s Labour party deepened with the suspension of two additional party members for making anti-Semitic posts on social media.

Nottingham City Councilor Ilyas Aziz was found to have promoted the anti-Semitic blood libel by posting that Jews should “stop drinking Gaza blood”. According to i24 News, Aziz also encouraged attendance at events organized by Interpal, a “charity linked to a Gaza show in which children reenacted gruesome scenes of Israeli-Palestinian violence.”

Mulla also alluded in August of 2015 on Facebook that Israel was to blame for the terror attacks in Paris in November, as well as the killing of Japanese prisoners captured by the Islamic State.

“So we have France voting to give Palestine statehood, and all of a sudden they get attacked by ISIS. Then we have Japan giving Palestine $100M dollars to reconstruct Gaza and suddenly ISIS takes two Japanese hostages,” he posted.

Among several posts, according to The Independent, Aziz also wrote that “Jews and Muslims lived together in the Middle East, in peace pre 1948. Perhaps it would have been wiser to create Israel in America it’s big enough. They could relocate even now.”

The latest suspensions follow last week’s suspensions of Shah for the revelation of how she suggested in a 2014 Facebook post that Israel should be relocated to the U.S. as a solution to the Israeli-Palestinian conflict, as well as Labour member and former London mayor Ken Livingstone, who told BBC Radio that Hitler initially “was supporting Zionism before he went mad and ended up killing 6 million Jews.”

Since the suspensions of Shah and Livingstone, Labour Party leader Jeremy Corbyn has launched an independent review of anti-Semitism and racism within his party. While acknowledging that there is indeed a problem, Corbyn insists it was “not huge”. The party leader told The Daily Mail, “What there is is a very small number of people that have said things that they should not have done. We have therefore said they will be suspended and investigated.”

Corbyn’s “very small number of people” actually amounts to dozens more beyond Aziz, Shah, Livingstone, and Mulla who are only the “tip of the iceberg” according to The Daily Telegraph. Approximately 50 others were “secretly suspended” over further “anti-Semitic and racist comments” which were found on the members’ social media channels. Included among the 50 is Shah Hussain, a councilor for Burnley, who was “suspended because of a July 2014 tweet…in which he accused Israel of behaving like the Nazis did in the Second World War,” according to i24 News.

Even further, Corbyn himself has come under fire in the past for calling the Hamas and Hezbollah terror groups “friends,” and for his connections to a Holocaust denier.

The anti-Semitism scandal comes just days before an election for the mayor of London on Thursday. The winner will replace outgoing Mayor Boris Johnson.

Ariella Mendlowitz contributed to this report.