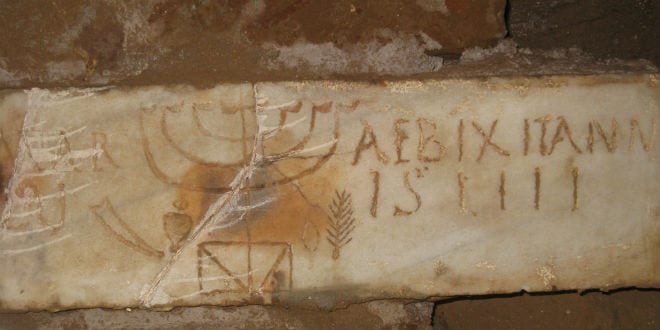 The city of Rome has announced it will open ancient Jewish catacombs to the general public for the first time in well over a decade.

While the 40 Christian catacombs in the area attract thousands of visitors each year, the Jewish tombs are usually only available by booking private, pre-arranged appointments.

Known as Vigna Randanini, the site, which is located outside the walls that surrounded ancient Rome, was discovered in 1859 beneath a former vineyard. It is a large complex made up of a maze of underground tunnels and artwork dating back to the 2nd and 3rd centuries CE Archaeologists suspect it was even in use until the 5th century, at which point the tombs reached maximum capacity with the several thousand Jews who were interred there.

Of the six Jewish catacombs that were unearthed, however, visitors are restricted to only two due to a high presence of toxic chemicals in the other four.

The extent of the tunnels reaches an astounding 18,500 square meters at a depth of five to 16 meters below ground.

Vigna Randanini’s visitors this week will be able to see inscriptions in Hebrew, Latin and Greek that tell of family lineage, status and occupation, according to The Catholic Register.

“While the catacombs have been sacked over the centuries, visitors can still see many colorful frescoes and tablets with depictions of the traditional Jewish candelabra,” read the report.

At the entrance of the catacombs is a building, which is thought to have been previously used as a synagogue. Lending evidence to this assumption are several indicators such as the existence of two separate areas (meant as a division between men and women during times of prayer), the location of the altar, and the distance of the building from urban areas.

The initiative to open the Jewish tombs to the public was introduced by Dario Franceschini, Italy’s culture minister, in his efforts to mark Pope Francis’ Jubilee Year of Mercy, a period of prayer during which the Catholic Church pleads for God’s universal pardon of all sins.

Giorgia Calo, the cultural councilor for the Jewish Community of Rome, welcomed the move, telling The Catholic Register that Jews “have always been a part of the history of the capital.”

Indeed, the history of the Jews in the Roman Empire dates as far back as 27 BCE when Rome took siege of Jerusalem and then proceeded to forcibly evict the Jewish people from their homeland. Shortly after their humiliating defeat, the Jews in Rome slowly acclimated and eventually thrived economically, becoming a significant part of the Empire’s population.

Today, the entire Jewish population in Italy numbers at approximately 45,000.