The Mystery of the Lost Jubilee: Part XVII – The Eternal Golan

Home » The Mystery of the Lost Jubilee: Part XVII – The Eternal Golan 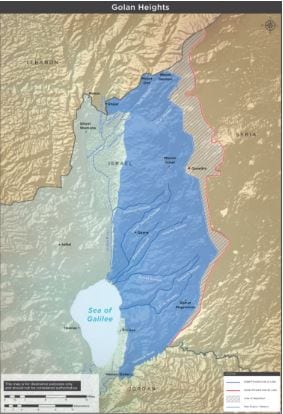 In part 16 of this series we explained how the Jubilees of the distant past don’t seem to line up with a Jubilee year in 1967 and 2016, but that for thousands of years chronologists have wanted to see all history fit together around the Jubilee year.

We have more to say on this topic, but before that we must touch on an exciting new development in this Jubilee year.

The Golan Heights, Israel’s mountainous northern region, is one of the most beautiful and most traveled parts of the country. It also is a critically strategic area, that commands the entire north of Israel.

Israel captured the Golan Heights from Syria in the Six Day War in 1967, and in 1981 extended Israeli law to the region, essentially annexing it.

That annexation was never recognized by the world, and even Israel has at times considered the Golan a potential bargaining chip it might employ in peace negotiations.

On Sunday April 17 this year, Prime Minister Benyamin Netanyahu made history by holding the first-ever official cabinet meeting on the other side of the Sea of Galilee in the Golan. At that meeting he declared to the entire world that “The Golan Heights will forever remain in Israel’s hands.”

Netanyahu had, in the past, according to multiple Israeli news sources, held secret discussions with Syria about the future of this region both in 1998, and again in 2010 prior to the beginning of the Arab Spring.

However, with the devolution of war-torn Syria, and the onset of talks in Geneva about how a diplomatic solution could be reached in Syria, it was time to change positions and to move quickly.

A statement from Netanyahu’s government needed to be made, because the UN does not recognize the Golan as part of Israel, and most if not all parties in the Syrian negotiations would propose adding the Golan into the set of lands that would end up being divvied up among all parties. It would be a prize too valuable to ignore and Netanyahu wanted no part in encouraging it.

“The time has come for the international community to recognize reality,” Netanyahu said at the cabinet meeting held in the Jewish village of Ma’ale Gamla. “First, no matter what will be on the other side of the border, the border will not change. Second, the time has come after 50 years for the international community to finally recognize that the Golan Heights will remain forever under Israeli sovereignty.” He added, “For the 19 years that the Golan was under Syrian occupation, it served as a place for bunkers, barbed wires, mines and aggression – it was used for war. In the 49 years that the Golan has been under Israeli control it was used for agriculture, tourism, economic initiatives, and building – it was used for peace.” (Emphasis added).

Netanyahu gave John Kerry a 12-hour advance notice of the coming statement, speaking with him on Saturday night. According to a report by the Jerusalem Post, Netanyahu told Kerry that he doubted Syria would ever return to what it was before the civil war that began in 2011.

The United States wasted no time announcing on Monday April 18 that it does not recognize the Golan as being part of Israel. The UN Security Council then held a meeting on the matter on Tuesday April 26 and formally replied:

“The members recall Resolution 497 [which] decided that the Israeli decision to impose its laws, jurisdiction and administration in the occupied Syrian Golan Heights is null and void and without international and legal effect.”

A number of points can be made with regard to the statements above concerning this potential Jubilee year.

What is really at issue here, of course, is the right of Israel to annex more of its historic homeland. Having Golan under Israeli control has only increased Israel’s claim: in the years since the liberation of the Golan, dozens of synagogues found there prove a thriving Jewish population existed there in the past. The fact that small amounts of oil have also been discovered in the Golan do not decrease its importance either.

Second, it is interesting that Netanyahu referred to the land as having been under Israeli control for 50 years – 49 to be exact. Was he aware of the principle of the Jubilee and purposely rounded 49 up to 50 years for that very purpose? For most world leaders we wouldn’t consider this, but for Netanyahu, a student of history and the son of a history professor, this would seem entirely possible.

And according to Bible prophecy, it won’t be the last. Much Israeli ground, to be gained at some point in the future, will be on the east side as well.

Forth, Netanyahu, unlike all but one other cabinet member who joined him, was driven to the meeting in his own vehicle. This meant he crossed over the Jordan River on a bridge on Sunday, presumably returning later that day. This allowed him to “re-enter the land” reminiscent of the footsteps of Joshua, who had claimed the ground on the east side of the Jordan first, and only then crossed the Jordan.

“Now the people came up from the Jordan on the tenth of the first month, and camped at Gilgal on the eastern edge of Jericho.” Joshua 4:19.

Fifth, on the very next day after the cabinet meeting, Monday April 18th in the afternoon of Nissan 10, the first-ever official celebration of Joshua’s crossing of the Jordan was held on the banks of the Jordan, about 100 kilometers south of the Galilee at Qasr al Yehud. The creation of this celebration was a combined effort between religious, political and military leaders. (See our Root Source blog for a detailed description of that event.) It is fascinating that just like the original crossing with its immediate celebration, this celebration at Qasr al Yehud only occurred after a decision was made to take certain lands on the east side of the Jordan. History repeated itself.

In this year of 2016 we have been looking to see if God would do something amazing.

Now to be fair, this declaration does not have the same “amazement factor” as the declaration in 1967 that Jerusalem was the eternal capital of Israel. Rather than using the adjective “amazing” in this case, we would rather call this clearly “important.”

An event at this level of importance would be the smallest kind of declaration we would expect to see in a Jubilee year. We will definitely be watching and hoping for more!

But, when you think about it, what Israel has just officially said to the world is that:

“It is eternally part of our homeland. No nation will ever take this from us, even by force.”

Those are powerful statements. Yet having said that, while it is clear that Netanyahu does not want to give up any of the land on his watch, we equally believe that Netanyahu does not want to extend the borders of Israel under his watch either. And if that is going to happen, then God must orchestrate a situation that forces Netanyahu to act on behalf of Israel’s safety. It is the only way. Netanyahu knows that land only comes with heartache and problems, at least for a while. For Netanyahu to take more land, he must be able to face his nation and say to them with absolute resolve, “This was the only way forward.”

Therefore, when we look at the implications of a Jubilee year, and what additional ground might be added, we are essentially agreeing that our request is a very tall order for the just over five calendar months remaining in this Jewish year. For the purposes of a Jubilee year, that is the bad news.

The good news is that if God so desires, five months is plenty of time.

Are you excited about Golan being permanently part of Israel, the first permanent Israeli land taken on the east side of the Jordan River?

Do you consider it important that this event preceded the anniversary of Joshua’s crossing of the Jordan by a single day?

Will there be, in your opinion, any negative consequences to the UN Security Council nations, who just unanimously rejected the Israeli claim to the Golan? How might God respond to them?

What else should we be watching for on the east side of the Jordan in the coming months and years?