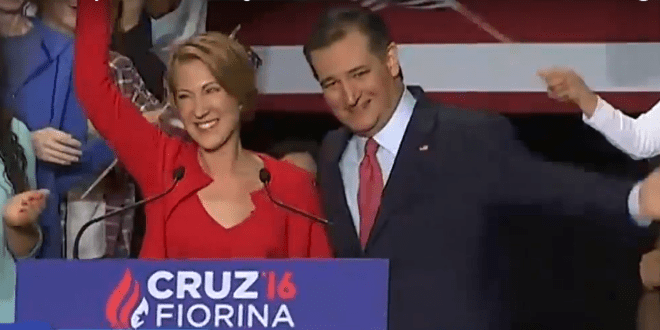 In a last-ditch attempt to revive his lagging campaign, Republican candidate Senator Ted Cruz has announced Carly Fiorina as his running mate. Fiorina, former head of Hewlett Packard, briefly ran for candidacy on the GOP ticket but dropped out in February. She is a strong critic of Democratic hopeful, Hillary Clinton, the only other woman in the campaign.

“Carly is a vice presidential nominee who I think is superbly skilled, superbly gifted at helping unite this party,” the US senator from Texas told a rally in Indianapolis, Indiana, the capital of the next state where primaries will be held.

The elections in November are still far off and Cruz acknowledged that running mates are usually chosen at a later stage.

“I think all would acknowledge this race, if anything, it is unusual,” said Cruz. He added that he wanted to help voters choose and show that the primaries are not over, despite Donald Trump having a substantial lead.

“I’ve had tough fights all my life,” Fiorina said after Cruz introduced her at the rally. “Tough fights don’t worry me a bit.”

Fiorina is an uncomfortable match for Cruz after disparaging remarks she made about him to CNN in January.

“He says one thing in Manhattan. He says another thing in Iowa,” Fiorina said in January. “He says whatever he needs to say to get elected, and then he’s going to do as he pleases. I think the American people are tired of the political class that promises much and delivers much of the same.”

MSNBC asked her if she had erred when making this statement, and she said, “Yeah.”

“And that’s why I voted for him in the voting booth. Before I ever had a conversation with him about endorsing him, I went into the voting booth in my hometown in Virginia and I voted for Ted Cruz,” Fiorina said. “Why? Because I think we need a conservative in the White House who understands that it is the system of crony capitalism and insider dealing that is bleaching away the prosperity and opportunity and potential of this nation.”

According to the Associated Press, Trump has garnered 987 of the 1,237 Republican national convention delegates he needs to secure the nomination. Cruz has 562, and Ohio Governor John Kasich has 153 delegates.

In his own inimical manner, Trump laughed off Cruz’s move.

Like Cruz, an avowed evangelical who has been consistently outspoken in support of Israel and its leadership, Fiorina has a strong pro-Israel stance. When still in the running for the nomination, Fiorina said that her first action in office would be placing a call to Israeli Prime Minister Benjamin Netanyahu to reaffirm America’s commitment to Israel.

She has criticized the Obama administration for its role in alienating Israel, saying, “This administration has made the world a more dangerous place by the way they have treated Israel.”