British MP Resigns In Disgrace After Suggesting Israel Relocate to US 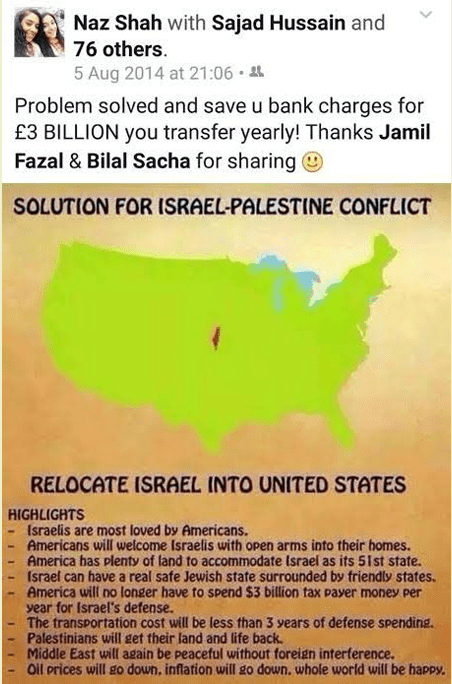 British Member of Parliament (MP) Naz Shah quit one of her political positions on Tuesday, scrambling to distance herself from anti-Semitic posts on social media that angered Israelis and Americans alike – while retaining a role that puts her in charge of investigating anti-Semitism in the UK.

Shah became the Labour Party Member of Parliament representing Bradford West in 2015. Two months ago, Shah was appointed as the Parliamentary Private Secretary (PPS) to John McDowell, the Shadow Chancellor of the Exchequer.

In August of 2014, one year before she was elected, she posted an image on Facebook of a map of Israel superimposed on a map of the United States with the caption “Problem Solved”, essentially suggesting that the Jews in Israel should be transported to a newly-created state inside US borders. She noted that Israel would need to return all the land and farms it has “stolen” and give full rights to the Palestinians. The future MP also suggested that moving the Jews to the US “would save them some pocket money”, suggesting the Americans could foot the bill out of all the money they give to Israel in military aid. The US, she said, “had plenty of land”.

She promised to present the idea to US President Barack Obama and UK Prime Minister David Cameron.  At the time, she was not in an elected position but working as the chair of a mental health charity called Sharing Voices Bradford. The Facebook post was discovered by Guido Fawkes, one of Britain’s leading political blog sites, and posted on Monday. The website then discovered a graphic Shah had posted on Twitter comparing “apartheid Israel” to Hitler, and yet another anti-Israel Facebook post with a link to a newspaper poll asking whether Israel had committed war crimes. She urged people to vote because “the Jews are rallying to the poll”.

More anti-Semitic comments by Shah were not difficult to find. The JC discovered a link posted on her Twitter account with a link to a blog claiming Zionism had been used to “groom” Jews to “exert political influence at the highest levels of public office”.

After her anti-Semitic remarks were made public, Shah contacted Guido Fawkes and explained, “This post from two years ago was made before I was an MP, does not reflect my views and I apologise for any offence it has caused.”

But Shah’s anti-Semitic opinions did not change after she was elected. During a parliamentary debate on child detainees and prisoners in Judea and Samaria – most of which had attacked Israelis – Shah claimed it was “absolutely unacceptable” to arrest minors because the Israeli government had no evidence that Israeli children were killed or injured by Palestinian minors protesting in the West Bank. Eitan Na’eh, Israel’s acting ambassador in London, wrote a formal complaint to Shah expressing his “profound concern”, noting, “the fact [is] that rock-throwing is a violent crime that can, and has, led to death on multiple occasions.”

Shah resigned from her position as PPS and the Labour Party issued a statement of apology in her name.

“I deeply regret the hurt I have caused by comments made on social media before I was elected as an MP. I made these posts at the height of the Gaza conflict in 2014, when emotions were running high around the Middle East conflict. But that is no excuse for the offence I have given, for which I unreservedly apologise. In recognition of that offence I have stepped down from my role as PPS to the Shadow Chancellor John McDonnell,” the statement said.

Ironically, Shah is still a member of the House of Commons Home Affairs Select Committee, which is conducting an inquiry into the rise of anti-Semitism. She justified her decision to retain this post, saying, “I will be seeking to expand my existing engagement and dialogue with Jewish community organisations, and will be stepping up my efforts to combat all forms of racism, including anti-Semitism.”

The Labour party has been accused of anti-Semitism in the past. Eight Tory MPs demanded that the Labour Party take action against Shah, at the very least by removing her from the Home Affairs Committee.

Shah’s Labour party colleague, John Mann, compared her to a Nazi, saying to Guido Fawkes, “The last person to propose a forced repatriation of this kind was Adolph Eichmann on August 15 in 1940.”

Jonathan Sacerdoti, director of communications at the Campaign Against Anti-Semitism, said in an interview with The Independent that the apology was not sufficient.

“One cannot simply apologise for ‘any offence caused’ and expect a evidence of gross and brazen anti-Semitism to disappear,” he said.

“Once again the Labour Party has been revealed to have within its ranks people who express extreme prejudice towards Jewish people in their public statements; once again the party has failed to find these statements itself, and reject those who freely and willingly express them.”