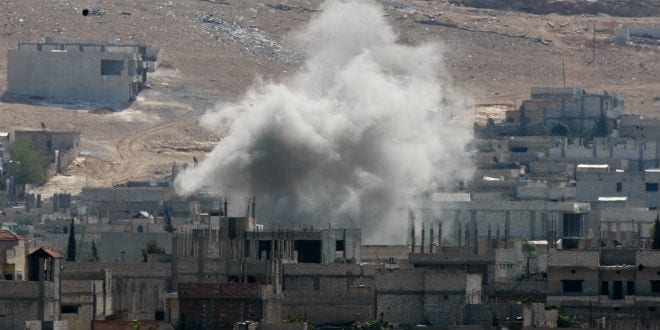 The US army has adopted a uniquely Israeli battlefield tactic in its fight against the Islamic State: exploding warning shells above buildings to warn civilians of impending bomb attacks.

The tactic, long used by Israel in its shelling of Hamas locations and operatives in the Gaza Strip, is meant to reduce civilian casualties in urban warfare. Known as “roof knocking”, it is one of the many maneuvers the IDF employs – including dropping leaflets, sending SMS messages, and placing calls – to alert innocent civilians of an incoming attack in their area.

The tactic is made necessary by Hamas’s well-known battle strategy of placing weapons caches, rocket launchers, and militants in areas with high civilian densities, such as schools, hospitals, and private homes.

US Air Force Major General Peter E. Gersten, deputy commander for operations and intelligence for the anti-ISIS Operation Inherent Resolve, revealed at a press briefing on Tuesday that the US Army had used the “knock operation” earlier in the month in Mosul, Iraq. He said that they had taken the idea and technique from IDF operations.

The US had been monitoring the home of an ISIS finance operative – or “finance emir” – who Gersten said was the “major distributor of funds to Daesh (ISIS) fighters.”

“We watched him come and go from his house, we watched his supplies, we watched the security that was involved in it. And we also watched occasionally a female and her children in and out of the quarters,” Gersten said, CNN reported.

The army began formulating a plan for getting the civilians out of the house, using reconnaissance aircraft and other intelligence assets.

“We went as far as actually to put a Hellfire on top of the building and air-burst it so it wouldn’t destroy the building, simply knock on the roof to ensure that she and the children were out of the building,” described the Major General. “And then we proceeded with our operations.”

He acknowledged that the Israeli roof-knocking method was “exactly where we took the tactics and technique and procedure from.”

“We’ve certainly watched and observed their procedure. As we formulated the way to get the civilians out of the house, this was brought forward from one of our experts,” he told the press.

While Gersten did not indicate whether or not there had been a formal consultation with the IDF on the roof-knocking procedure, the US Army and the Israel Defense Forces enjoy a high level of cooperation, often working together to run joint military drills, develop defense technology, and exchange intelligence.