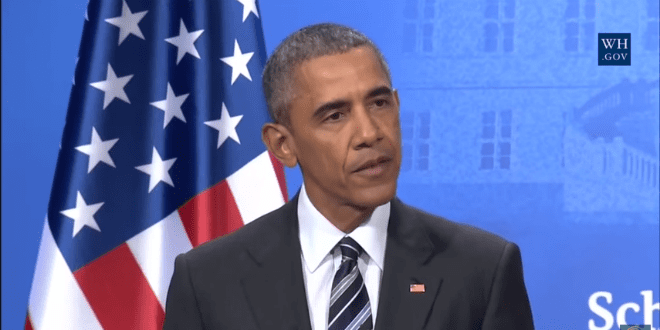 Addressing world leaders at a trade fair in Hannover, Germany on Monday, US President Barack Obama acknowledged the good fortune of living in what he considers to be the “most peaceful” era in human history. He noted major advances in education, longevity of life, health care, and the spread of democracy as some of the many benefits of living today.

With pride, Obama added extreme strides in social equality to the list. “Around the world we’re more tolerant, with more opportunity for women and gays and lesbians as we push back on bigotry and prejudice,” he said.

Discouraging any incredulity, he explained that the negative images portrayed in the media showing rampant global violence were misleading.

“I want to begin with an observation that, given the challenges that we face in the world and the headlines we see every day, it may seem improbable but it’s true. We are fortunate to be living in the most peaceful, most prosperous, most progressive era in human history,” he said.

The president clarified his position, noting that it had been several decades since the major world powers had faced each other in war. “[Though] it seems like only bad news comes through every day, it’s been decades since the last war between major powers,” he said.

Ironically, amid reassurances of the current (relatively) peaceful era, Obama added that he plans to call on European leaders, encouraging them to step up their efforts to fight the radical Islamic group known as ISIS. Upon this declaration, the president revealed that the US will be sending an additional 250 Special Forces troops into Syria to join in the fight.

“Europe and NATO can still do more,” he said. “We need to do everything in our power to stop [ISIS],” adding, “Europe has sometimes been complacent about its own defense.”

While Obama’s statement regarding the length in time since World Wars One and Two is factually true, current data does not support his overall claim about this era being peaceful. In fact, it’s completely the opposite; the security situation in the world has worsened significantly since he took office in 2009.

A recent study by Mida, a liberal Israeli current affairs and opinion online magazine, based their conclusions on the database of the Department of Peace and Conflict Research at Uppsala University in Sweden, which includes a comprehensive list of wars and conflicts worldwide using data collected since 1989. In an article titled, No Global Cop: The Victims of Obama’s Appeasment, Bigman notes that 80 percent more people were killed in wars around the globe under Obama’s isolationist policies than under Bush’s wartime, interventionist presidency. The areas hardest hit by the two terms of Obama’s policies were in the Mideast.

Choosing to put his focus elsewhere, Obama’s latest statements tend to emphasize the threat of global warming as the bigger danger. In a December interview on CBS This Morning, the president stated that climate change leads to terrorism and “dangerous ideologies”. He expressed this most clearly by taking a pass on the massively attended rally in Paris in January 2015 against terror, while calling the Paris summit in November dealing with climate change a “powerful rebuke” to terrorism and ISIS.

Though war is a tragic reality, the Bible does not always forbid it. Under certain conditions, it is the preferable alternative and sometimes even required by God. Maimonides wrote regarding the responsibilities a king in the Messianic era faces at the time closely preceding the war of Gog and Magog, that he must wage a final war against the root of all evil. Were a king or leader of any sort to neglect this obligation and instead capitulate to the forces of evil even in the name of peace, as Obama’s statements indicate, it would only bring more pain and suffering into the world.