Amid Celebrations of the Exodus, Birdwatcher Discovers 3,700-Year-Old Egyptian Scarab 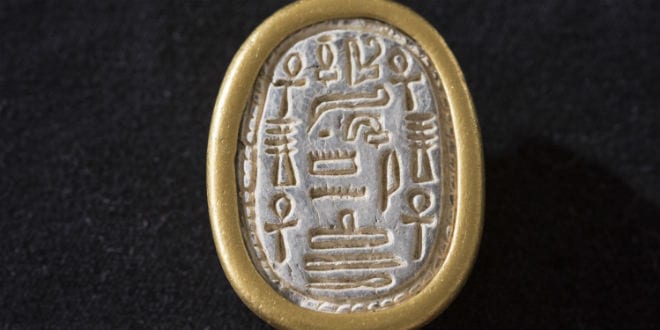 An Israeli amateur birdwatcher accidentally discovered an ancient scarab seal belonging to a senior Egyptian official of the Thirteenth Pharaonic Dynasty dating as far back as the 18th century BCE, researchers at Haifa University announced on Sunday.

Alexander Ternopolsky was birdwatching near the Tel Dor archaeological site on Israel’s Carmel Coast, where an ongoing excavation of the ancient port city of Dor is taking place, when he happened upon the incredible find. Ternopolsky immediately handed it over to the archaeological team working at the site.

According to Haifa University, the coastal city of Dor at the foot of Mt. Carmel was a key port city for thousands of years. Until the Romans built Caesarea, Dor was the most important commercial center in area and a trading base for spices, resin, and other commodities that were highly valued by the ancient Egyptians. The city was even mentioned in several ancient Egyptian documents dating back 3,500 years.

A preliminary study concluded that the stone scarab is engraved with the name of its owner as well as his position. The description of the scarab owner’s position includes such phrases such as “overseer of the treasury,” “bearer of the seal,” and more, but the owner’s name has not yet been deciphered.

“The scarab must have belonged to a very senior figure in the kingdom, probably the viceroy responsible for the royal treasury,” explains Prof. Ayelet Gilboa from the Department of Archaeology at Haifa University, who is heading the excavations at Tel Dor together with Prof. Ilan Sharon from the Hebrew University in Jerusalem.

The excavators suggest several theories explaining how the scarab might have reached Tel Dor. The first is that either a representative of the viceroy or the viceroy himself may have come to Dor.

Another option is that the scarab arrived at Dor at a much later stage, perhaps even during the Roman period, when there was demand for such Egyptian “antiques”.

“Since the scarab rolled down from the mound and was not found in its archaeological context, we will probably never really know when and how it got here and where it has been,” said Prof. Gilboa.