Israel Overdue for Huge Earthquake Which Could Fulfill Prophecy of Messiah 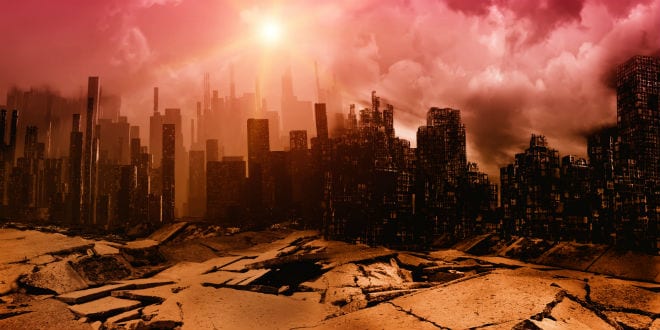 An end of days scenario has suddenly appeared in Japan and Ecuador as seven major earthquakes hit both coasts of the Pacific in 96 hours. Many seismologists are convinced this is only the beginning of a global phenomenon, but rabbis and people of faith recognize this as part of the Messianic process.

Over 500 people were killed on Saturday when a 7.8-magnitude earthquake hit Ecuador. 1,700 people are still missing, over 4,000 are injured, and thousands more are wandering homeless.  A 7.3-magnitude quake hit Japan’s southern island last Thursday, while over 600 smaller tremors continued to shake the survivors. The death toll in Japan stands at 47 killed, more than 1,000 injured, 8 missing, and over 100,000 left homeless.

Other less-deadly earthquakes were felt around the world. Many scientists are convinced this recent epidemic earthquakes is just a prelude to increased seismic activity around the globe in unprecedented magnitudes. University of Colorado seismologist Roger Bilham told the Express, “The current conditions might trigger at least four earthquakes greater than 8.0 in magnitude. And if they delay, the strain accumulated during the centuries provokes more catastrophic mega-earthquakes.”

Experts from  India’s Ministry of Home Affairs warned in January that yet another major quake, equal or larger than the last disaster, can be expected in the region.

Seismologists at Tokyo University estimate there is a 98 percent chance that in the next 30 years Japan will be hit by another major earthquake of catastrophic proportions. 2011’s 9.0-magnitude quake killed over 20,000 people, but its destructive effects didn’t end at mere earth-shifting. Japan’s Fukushima power plant was designed to withstand earthquakes, but a meltdown occurred when the ensuing tsunami washed away generators powering the emergency cooling, leaking large amounts of radioactive material into the atmosphere.

This apocalyptic scenario could easily be repeated with devastating results in many developed countries, including the US. Nuclear power plants in California, New York, Washington State, and Arkansas are situated near major fault lines. Other plants in Maine, Pennsylvania, and Virginia have raised concern of their earthquake survivability with the Nuclear Regulatory Commission but were deemed within acceptable standards.

Especially at risk is the Diablo Canyon Nuclear Power Plant in California, which is situated directly on the ocean, making it very vulnerable to tsunamis. It sits in an earthquake red zone, in close vicinity to four active fault lines, one lying only 2,000 feet away from the plant’s two nuclear reactors. S. David Freeman, a former general manager of the Sacramento Municipal Utility District, called the nuclear plant “a disaster waiting to happen.”

In fact, tsunamis are far more devastating than the earthquakes that trigger them. In 2004, the Band Aceh earthquake, barely felt on land, created a tsunami in the Indian Ocean that killed about 250,000 people in Sumatra and Indonesia.

A recent study by seismologists at the University of California suggests that Southern California is at greater risk of tsunamis than previously thought. A 7.0-magnitude earthquake in the Ventura Basin Fault could generate a tsunami that would penetrate up to two kilometers inland in less than half an hour, devastating a heavily populated area.

Rabbi Yitzchak Batzri, a noted Kabbalist from Jerusalem, spoke to Breaking Israel News about how the wave of earthquakes fits into the Messianic process. There is no doubt that the earthquakes have a divine origin, he said.

“The potential of earthquakes is in the world from the first days of creation, but the power that brings it into existence is God’s will,” Rabbi Batzri said.

That will is triggered by human action, he continued. “Our actions, in relation to God, affect his decision to enact the forces of nature, especially in things having to do with our rejecting sanctity.”

“King David wrote, ‘Who looketh on the earth, and it trembleth; He toucheth the mountains, and they smoke’ (Psalm 104:32) to describe what will happen in the End of Days before the final redemption. There will be an earthquake in Israel, but it will be beneficial, opening up the Temple Mount, bringing forth living waters, purifying the city to receive the Messiah.”

The rabbi’s understanding of the prophecy supported by the opinions of many scientists. Israel sits on the Syria-African rift, which runs along the Dead sea Valley. It passes through the area thought to be the sites of Sodom and Gomorrah, and the city of Jericho, which still stands today. The Biblical accounts of the destruction of the twin cities of evil, and the later account of the falling walls of Jericho, could very well be interpreted as divinely powered geologic catastrophes.

Such events are not uncommon in the region. Dr. Shmuel Marco, who has spent many years studying the timeline of earthquakes in the region, told the Jerusalem Post that a major earthquake could be expected in the near future. Major earthquakes were recorded in the Jordan Valley in the years 31 BCE, 363 CE, 749 CE and 1033 CE.

“So roughly,” said Marco, “we are talking about an interval of every 400 years. If we follow the patterns of nature, a major quake should be expected any time because almost a whole millennium has passed since the last strong earthquake.”

The rash of earthquakes has brought about one of those rare scenarios in which scientific theory and prophetic vision agree: earthquakes threaten our future. Man would be wise to prepare, spiritually and physically, for what lies ahead.