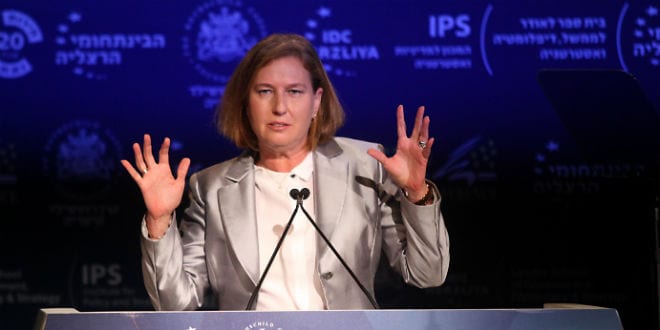 When Tzipi Livni finished her address at Harvard Law School, a student leader asked her a personal question which many believed to be an anti-Semitic slur of the worst kind: Why do you smell so bad? Amidst all the academic discussion and polite posturing, a retraction or apology was glaringly absent.

On April 14th, former Israeli Foreign Minister and co-leader of the Zionist Union party , Tzipi Livni, was addressing a crowd of 150 students and faculty at Harvard Law School.  The event was hosted by the Program on Negotiation at Harvard Law School and co-sponsored by the Jewish Law Students Association and Harvard Hillel. Titled “The Israeli-Palestinian Conflict & the US” , the event featured a dialogue between Livni and American Diplomat Dennis Ross.

Things got  up-close and personal during the question and answer segment when a student smugly asked, “How is it that you are so smelly?”

The room went silent so the  student rephrased his question as a statement.

‘It’s regarding your odor – about the odor of Tzipi Livni, very smelly.’

The Harvard Jewish Law Students Association published a sharp criticism of the remarks in the Harvard Law Record, claiming they were a reference to the anti-Semitic epithet, ‘smelly Jew’.

“We are writing to condemn what we view as blatantly anti-Semitic rhetoric. We demand a public apology to Ms. Livni, the Jewish students of HLS, and Harvard Law School at large. Further, we demand respectful behavior from students at our events in the future.”

In response, the still anonymous student published a letter that fell way short of being an apology. In it, he claimed to be unaware of any such racial slur and had no intention of denigrating Jews, claiming he was not anti-Semitic. He did not retract his comments or apologize to Livni, the Jews, or the Jewish students. The Harvard Law Record published his response, in which he apologizes “as sincerely as I can”.

Apparently, not all of the Jewish students felt his comments were unacceptable, as he noted, “Many members of the Jewish community—some of whom hold strong differences of opinion with me—have reached out to me on their own to let me know that they did not interpret my words as anti-Semitic.”

It has since been reported that the student in question was a third-year law student and a leader of Harvard Law’s Justice for Palestine chapter named Husam El-Coolaq.

Harvard Law dean Martha Minow sent out an email to the entire school community condemning the episodehas been taken, nor has the student been addressed directly by the university’s administration. Nonetheless, Tzipi Livni was pleased with the response from Harvard.

“A chain reaction has led to this remarkable result, whereby the University leadership was encouraged to release a public statement which denounces anti-Semitism and which prohibits these types of remarks.”