Obama Snubbed by Saudi King, May Be Sign of Bigger Problems

Home » Obama Snubbed by Saudi King, May Be Sign of Bigger Problems 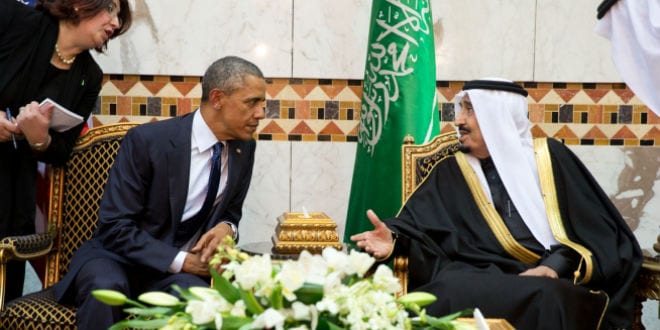 US President Barack Obama has been accused of snubbing several people and skipping significant events, but in his recent visit to Saudi Arabia, the shoe was suddenly on the other (presidential) foot.

When Air Force One touched down in Saudi Arabia on Wednesday for the Saudi hosted Gulf Cooperation council (GCC)-US summit,  the US president was greeted by the governor of Riyadh, Prince Faisal bin Bandar Al Saud, a relatively low ranking official, and the event was not broadcast live on Saudi TV, as is usually done when foreign dignitaries visit the kingdom.

US officials denied the glaring lack of a reception was intended as a snub, noting ironically that Obama rarely greets foreign leaders when they arrive in the US.

In contrast, Saudi King Salman Bin Abd al-Aziz did greet  Gulf leaders arriving for the summit and that event was televised.

Saudi Arabia used to be one of America’s strongest allies in the region. This presidential visit, Obama’s fourth and probably last before his term ends, stands in sharp contrast to his visit in 2009, when the president was criticized for apparently bowing to King Salman.

Relations between the countries have cooled as America is buying much less Saudi oil then when Obama took office.  Other countries, like China, have taken America’s place as preferred customers.

In a recent interview with the Atlantic Magazine, President Obama said that Saudi Arabia and Iran, the Sauid’ most bitter enemies, would “need to find an effective way to share the neighborhood and institute some sort of cold peace.”  In the same interview, he also referred to American allies in the Persian Gulf as “free riders”, in an oblique, yet unmistakable jab at the Saudis.

Mustafa Alani, a Gulf security analyst who is close to the Saudi establishment, told the Associated Press that Obama would find a Saudi leadership “that’s not ready to believe him”.

“The Saudis had disagreements with previous presidents,” Alani told AP. “Here you have deep distrust that the president won’t deliver anything.”

Alani said the snub at the airport reception was clearly intended to convey that message. The two countries are at odds over several issues.

Saudi Arabia objected to the Washington brokered nuclear deal with Iran, which essentially forced them to develop a nuclear program as well. Ironically, it has driven them to closer ties with Israel, also Iran’s enemy.

Saudi Arabia is dissatisfied with America’s actions in Syria, claiming that Obama backtracked on a red-line he established against Assad’s use of chemical weapons.  After issuing an ultimatum, Obama did not follow through when mustard gas was used near Damascus in 2013.

Saudi Arabia is also angry at the reopening of files that may connect them to the 9-11 terror attacks.  9-11 victims’ families and US lawmakers called on the government to release censored documents that may implicate Saudi Arabia. Obama confirmed this week that US intelligence authorities will review the censored documents.  In response, Saudi Arabia has threatened to sell its multi-billion dollar  assets in the US if Congress passes a bill holding Saudi Arabia responsible for the 9/11 attacks. Obama opposes the bill in any case, because it could potentially expose the US to lawsuits from other countries.