Bernie on Bibi in Yiddish NY Ad: “May the Name of the Wicked Rot”

Home » Bernie on Bibi in Yiddish NY Ad: “May the Name of the Wicked Rot” 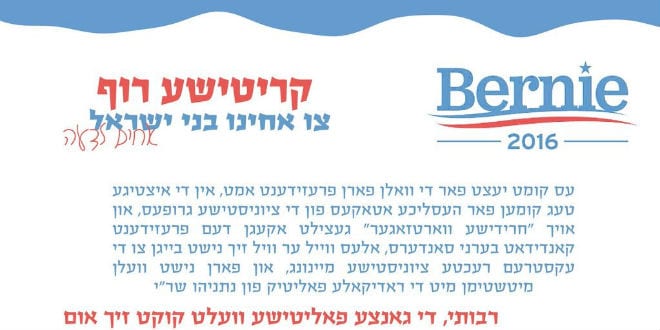 Tuesday saw New Yorkers cast their votes in the primaries, and both Democratic and Republican candidates spent time courting the state’s sizeable Jewish community in the days leading up to the race, Israel National News reported.

One group circulated YIddish flyers in support of Democratic candidate Bernie Sanders, complete with Sanders’s official campaign logo. The flyer emphasizes Sanders’s disapproval of Israeli Prime Minister Benjamin Netanyahu, following his name with the Hebrew acronym for a curse which translates “may the name of the wicked rot”.

“Some self-interested haredi figures have attacked the Democratic candidate for president, Bernie Sanders, calling on [the Jewish public] not to vote for him,” the flyer reads. “The real reason [for their opposition] is because Sanders refuses to bow down to radical right-wing Zionists, and because he does not agree with the radical policies of Netanyahu, may the name of the wicked rot”.

On the other hand, Cruz’s Yiddish ad plays up his religious faith in an effort to build common ground.

“Presidential candidate Ted Cruz is the first and only since President Reagan who believes that God is the one who decides who will be elected president of the US, which is why he is confident that he will be elected,” the ad says.