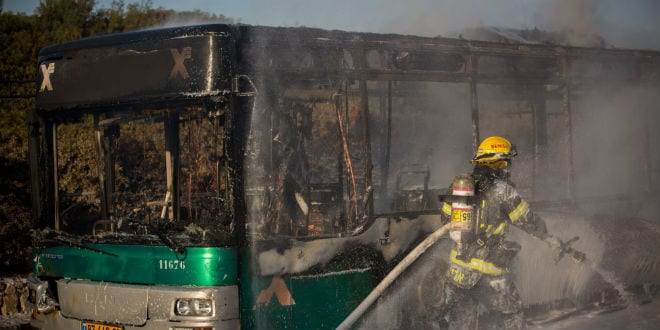 On Monday evening, a bomb went off in a crowded bus in Jerusalem, showering passengers trapped inside with deadly shrapnel and setting it ablaze. In what can only be described as a miracle, no one was killed.

It is thought that a terrorist in the back of the bus set the bomb off. When firemen and rescue personnel arrived, the bus and another nearby empty bus were engulfed in flames, a pillar of smoke visible from far off. Over 20 people were injured, seven moderately, two seriously. Five of the injured suffered from sever shell-shock, traumatized by the horror that surrounded them.

Before It’s News wrote that it was “a miracle there are no dead”. Many in the Hebrew language media echoed the sentiment. Eliyahu Eliovitch, one of the first volunteer medics to arrive at the scene, told the news site Kikar Shabbat, “Thank God, the people of ZAKA (who deal with dead bodies) arrived and had nothing to do. It is with God’s mercy that no one was killed.”

Expressing what several other first responders said in the media, he added, “It is only by a miracle that no one was killed in such a difficult attack. This could have ended in a much worse catastrophe, God forbid.”

Israel is all too familiar with the deadly effects of bus bombings. From 1993 until 2008, Israel was struck by no less than 150 bomb attacks that targeted civilians. Over 800 people were killed in these attacks. Almost 30 of those bombs exploded on buses. Of those, a mere two were without fatalities.

The likelihood that a bomb exploding in a bus crowded with commuters and school children would claim no lives was low indeed. According to the statistics alone, the passengers of bus number 12 in Jerusalem were incredibly lucky.

Police initially refrained from labeling it a terror incident, at first blaming a mechanical failure in the bus. However, after several hours of confused reports, Jerusalem police chief Yoram Halevy officially confirmed what seemed obvious to many.

“When a bomb explodes on a bus, it is a terror attack,” Halevy said. He added that it was still unclear if the terrorist was on the scene at the time of the explosion. It is suspected that a critically injured person was the terrorist, though his identity is still unconfirmed.

Halevy also said the police were not caught totally off-guard, implying previous intelligence information, but he refused to elaborate.

This was the first bombing in eight years and the first bus bombing in almost twelve. It may be a sign the Palestinians intend to escalate their efforts to attack Israelis just as the country is breathing a sigh of relief after what seemed to be an easing off of terror.

Hamas did not claim responsibility for the attack but praised it anyway. Mosques in Gaza proudly announced the news over their prayer loudspeakers. A spokesman for Hamas in Qatar, Husam Badran, said, “This attack affirms to everyone one that our people will not abandon the resistance path.”

Israeli Prime Minister Benjamin Netanyahu vowed to retaliate for the vicious attack. “We will locate those who prepared this explosive device. We will reach the dispatchers. We will also reach those behind them. We will settle the score with these terrorists.”

Rabbi Aryeh Shtern, the Chief Rabbi of Jerusalem, spoke to Kikar Shabbat about the pre-Pesach attack.

“It pains the heart to hear that even in the days before the holiday, when everyone is busy preparing for the Festival of Freedom, our enemies are seeking specifically at this time to attack the joy of our celebration. But we will not be broken or despair, because this is exactly what we say on the Seder night, ‘That in each generation, they stand against us to destroy us, and God saves us from them’.”