The Menorah Treasure Discovered in the Heart of Jerusalem

Home » The Menorah Treasure Discovered in the Heart of Jerusalem 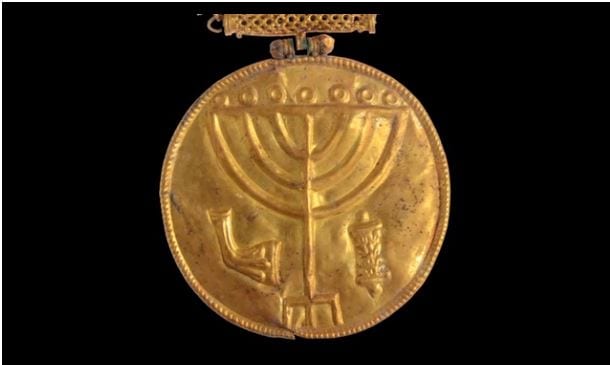 In 2013, Dr. Eilat Mazar and her team of diggers unearthed one of the most influential discoveries in the field of Biblical archaeology in the Ophel excavations.

Ophel, Hebrew for “a high place” (to climb to), is a biblical term, used since the times of the First Temple, given to part of a settlement that is elevated relative to its surroundings. The Ophel in Jerusalem refers to an area approximately 50 meters south from the Temple Mount on the border with the City of David, the site of ancient Jerusalem’s capital of the pre-Babylonian exile era.

General Sir Charles Warren initiated the first excavations in the Ophel area in 1867, but it wasn’t until 1968 under Benjamin Mazar that remains from the First Temple period (from 957 to 586 BCE), such as water cisterns, tombs and parts of Robinson’s arch, were unearthed. Carrying on her father’s legacy, Dr. Eilat Mazar first tackled the site in 1986 and returned three years ago to continue.

Dr. Mazar’s persistence was well rewarded. Just five days into the summer dig, the team of Hebrew University archaeologists was astonished to uncover a trove of archaeological goodies: 36 gold coins, as well as several pieces gold and silver jewelry. But the prize find was the now-famous Menorah Treasure, a 10-centimeter golden medallion with three sacred Jewish motifs etched into it: a menorah, a shofar (ram’s horn), and a Torah scroll.

The gold cache was discovered in a Byzantine structure which archaeologists say was constructed in the sixth century CE. Dr. Mazar believes the trove was carefully hidden by a group of Jews during the Persian conquest of Jerusalem in 614 CE. The collection itself is only the third of its kind ever discovered in Jerusalem.

According to the Hebrew University report, the medallion was “hanging from a gold chain” and is “most likely an ornament for a Torah scroll.” If indeed it is meant to adorn a Torah scroll, “it is the earliest Torah scroll ornament found in archaeological excavations to date.”

Further, Dr. Mazar noted, “The most likely explanation is that the Ophel cache was earmarked as a contribution toward the building of a new synagogue, at a location that is near the Temple Mount.” Despite the honorable intentions, however, the mission was clearly unsuccessful. “The treasure was abandoned, and its owners could never return to collect it,” Dr. Mazar said.

The original menorah itself was first constructed by the Israelites, at God’s instruction, for use in the Tabernacle services as they sojourned in the desert.

Over time, the candelabra has become the national symbol of Israel, appearing on Israeli currency, the Presidential seal, on the tags of IDF soldiers and law enforcement personnel, and on the seal of the Mossad (the national intelligence agency). Reflecting the historical presence of Jews in the area, the menorah represents the strength and resilience of the Jewish people throughout their arduous history.

The medallion and the cache of treasures discovered with it are now housed at the famous Israel Museum in downtown Jerusalem.

The City of David, the site of dozens of exciting archaeological finds including the Ophel excavations, has recreated the menorah medallion so that everyone can share its beauty and the powerful message it carries. Explaining the reason for the replication, Avishai Shraga, City of David store manager, told Breaking Israel News, “The medallion is a symbol for the Jews never to give up, despite the hardships we have faced throughout every generation.”