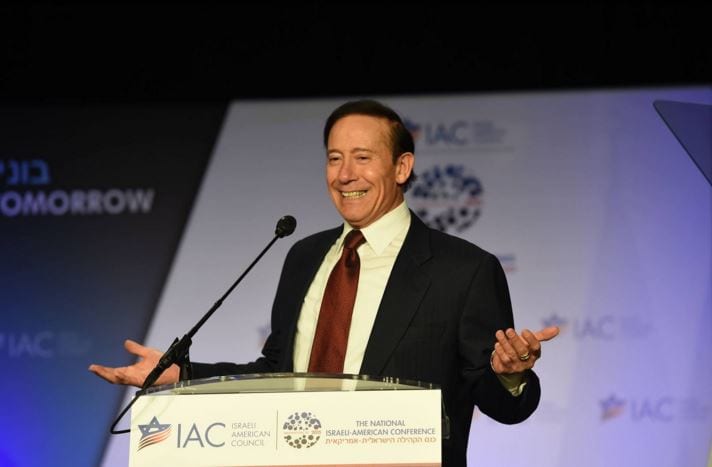 There are nearly one million Israelis living in the United States forming roughly one third of the entire pro-Israel Jewish camp. However, Adam Milstein, chairman of the Israeli-American Council (IAC), hopes to have an even larger voice in support of Israel, by connecting Israelis living in America with Evangelical Christian Zionists.

Sitting down with Breaking Israel News, Milstein explained that the IAC sees the Evangelical community as natural allies in the fight for Israel. “We share the same values, the same beliefs and share a common enemy.”

While the American Jewish establishment has been slow in accepting the friendship and support of the Christian Zionist community, Milstein sees the IAC differently: “Israelis are more pragmatic”.

The real estate entrepreneur and philanthropist is one of the leading voices in the fight against BDS through his prolific presence on Social Media. Milstein was named one of the 25 most influential people on ‘Jewish Twitter’ and writes a regular column for the Huffington Post.

“I look at BDS as a movement to eradicate the State of Israel. It’s not about the economy. They want to destroy us,” Milstein told Breaking Israel News.

However, Milstein’s warning about BDS takes the argument a step further. He has used his platform on social media to call out notorious leaders of BDS for not only their anti-Semitic vitriol, but their animosity towards America.

“BDS leaders hate America’s leadership role around the world,” Milstein wrote in the Huffington Post, quoting Purdue University professor Bill Mullen, who said, “We can build a still-stronger BDS movement beginning in the name of Palestinian freedom and ending in a permanent blow against American empire.”

Milstein warned, “BDS leaders hate America’s democracy – and have even called for violent attacks to overturn our democratic system.” He cited Berkeley Professor Hatem Bazian, the founder of Students for Justice in Palestine who incited a San Francisco rally, who said, “Are you angry? Well, we’ve been watching intifada in Palestine, we’ve been watching an uprising in Iraq, and the question is that what are we doing? How come we don’t have an intifada (armed struggle) in this country…and it’s about time that we have an intifada in this country that change[s] fundamentally the political dynamics in here…They’re going to say [that] some Palestinians are being too radical; well, you haven’t seen radicalism yet!”

For these reasons, it’s a mistake to see BDS as a Jewish problem, claims Milstein.

Of late, Milstein has expanded his network from the influential Jewish mega donors such as Sheldon Adelson and Chaim Saban, with whom he co-founded the Campus Maccabees in June 2015.

For his most recent article, Milstein joined forces with Pastor Carlos Ortiz and co-authored “A Common Fight: Why Christians and Jews are Coming Together to Defeat Hate and Intolerance”.

In the article, the Israeli-American Jew and the Hispanic Pastor warn, “We must not be fooled: BDS was born from a radical Islamic ideology in the Middle East that not only hates Judaism, but also Christianity and America.”