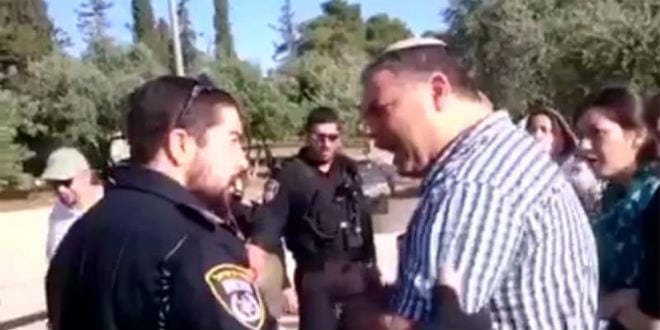 On Sunday morning, a Jewish American tourist wearing a yarmulke stood on the Temple Mount with a group of fellow Jewish tourists and spoke about the meaning of a biblical verse. A group of black-uniformed police converged on him and accused him of engaging in Jewish prayer, which is against the law in that country. The Jewish man tried to defend himself, arguing that he was merely explaining a biblical verse, “Please, God, save [us], Please God, give [us] success” (Psalms 118:25).

The cops rushed to the man and his group as soon as they heard the words “Please, God” pronounced in Hebrew. The rest of the lecture was in English. The man insisted, in English, that he was merely explaining the verse and not praying. The cops had no patience for lengthy arguments with a Jew and arrested him.

Several other Jewish tourists tried to intervene, explaining that it was a misunderstanding, they wouldn’t have even dreamed of praying there, in a country that punishes Jews who engage in public prayer, it was merely a mention of a verse in the context of a talk. At which point the arresting officer declared:

“On the Temple Mount I decide what’s prayer.”

The entire scene took place in Jerusalem, the eternal capital of the Jewish State, where black uniformed police decide what’s prayer and what’s not. On Temple Mount, as part of decades of government policy, state police violate the human right to free worship Jews are entitled to like all the other humans on the planet.

The legal aid society Honeinu said in a statement: “The conduct of the State of Israel and Police regarding the suspicion of Jewish prayer on the Temple Mount is, first of all, ridiculous, and in addition it is discriminatory and predatory. It is inconceivable that a law-abiding man would be arrested like the lowest criminal for explaining a verse from Psalms. In any other country such an arrest would have been called anti-Semitic.”