Netanyahu Declares: Golan Heights Ours From Biblical to Modern Times 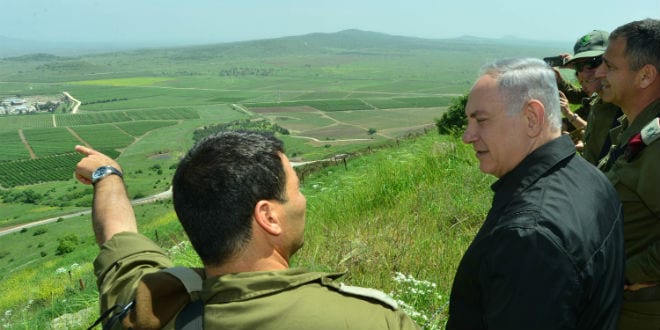 The Israeli cabinet held its first-ever meeting in the Golan Heights on Sunday amid reports that the territory is being discussed as part of Syrian civil war peace talks.

“I convened this celebratory meeting in the Golan Heights to send a clear message: The Golan will always remain in Israel’s hands. Israel will never withdraw from the Golan Heights,” declared Israeli Prime Minister Benjamin Netanyahu at the council.

He pointed out that the Golan is Israel’s ancient heritage, calling it an “integral part of the Land of Israel in ancient times.”

“That is documented by dozens of ancient synagogues around us,” he said, referring to the remains of Jewish settlements dating back thousands of years. “And the Golan is an integral part of the State of Israel in the present time.”

According to recent reports, Netanyahu is upset over indications that a negotiated deal on the Syrian civil war that is being worked on by world powers would declare the Golan Heights as Syrian territory. He stated categorically that no such deal was acceptable to Israel.

Israel’s Channel 10 reported that Netanyahu phoned US Secretary of State John Kerry over the issue, and that he will also discuss the matter with Russian President Vladimir Putin during their upcoming meeting. The Prime Minister’s Office said Netanyahu will “act to ensure” that any language declaring that the territory belongs to Syria is unacceptable.

“I told the Secretary of State that we would not oppose a political resolution in Syria [to the civil war] so long as it does not come at our expense,” Netanyahu said at the meeting. “That is to say, at the end of the day Iranian forces, ISIS, and Hezbollah need to be removed from Syrian territory.”

In Biblical times, the area now called the Golan Heights was known as Bashan; its name is derived from the Biblical city of “Golan in Bashan”. Originally the land was assigned to the tribe of Mannaseh. During the times of the First Temple, the northern Jewish kingdom of Judea fought with the Aramean kingdom for control of the Golan; Israel’s king defeated the Aramean king near the current site of Kibbutz Afik.

Israel gained control of the strategically important Golan Heights during the 1967 Six-Day War. After Israel briefly lost territory during the 1973 Yom Kippur War, Israel and Syria established a United Nations-monitored ceasefire line in the region, with Israel taking the western two-thirds of the territory. Amid the ongoing Syrian civil war, the territory continues to play a strategic role for Israel. Iran, Hezbollah, and the Islamic State terror group all have a presence in Syrian territory near the Israeli border.

With additional reporting by Abra Forman