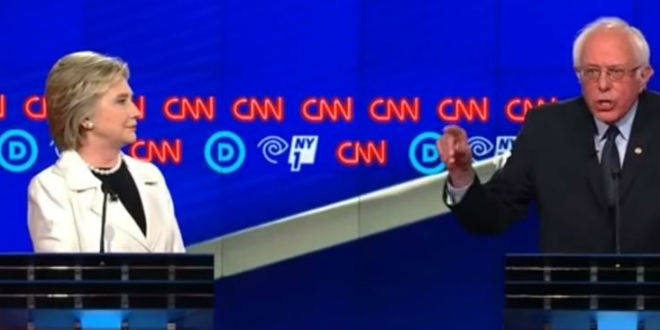 In a long exchange at the fifth Democratic primary debate on Thursday, candidates Hillary Clinton and Sen. Bernie Sanders (Vt.) sparred on American policy regarding the Israeli-Palestinian conflict.

Sanders called himself “100 percent pro-Israel,” but added that “in the long run, and this is not going to be easy, if we are ever going to bring peace to that region that has seen so much hatred and so much war, we are going to have to treat the Palestinian people with respect and dignity….I believe the United States and the rest of the world have got to work together to help the Palestinian people. That does not make me anti-Israel. That paves the way, I think, to an approach that works in the Middle East.”

Leading up to the April 19 primary in New York, a state with a large Jewish population, Sanders had ignited controversy through an interview with the New York Daily News in which he inflated the number of Palestinian civilian deaths in Gaza during 2014’s Operation Protection Edge at least sevenfold. His campaign also hired a Jewish outreach coordinator who is an outspoken critic of Israeli government policies, but subsequently suspended her over her profanity-laced social media posts about Prime Minister Benjamin Netanyahu.

In the debate, Sanders said that “there comes a time [when] if we are going to pursue justice and peace, that we are going to have to say that Netanyahu is not right all of the time.”

Clinton, who according to recent New York opinion polls holds a double-digit leader over Sanders in the state, responded by pointing to her experience as secretary of state when it comes to the Israeli-Palestinian conflict. She questioned Sanders’s position by saying that Israel does not “seek this kind of attacks. They do not invite rockets raining down on their towns and villages. They do not believe that there should be constant incitement by Hamas, aided and abetted by Iran, against Israel. And so when it came time after they had taken the incoming rockets, taken the assaults and ambushes on their soldiers, and they called and told me…they were getting ready to have to invade Gaza again because they couldn’t find anyone to talk to, to tell them to stop it.”

“I don’t know how you run a country if you are under constant threat…even the most independent analysts say that the way that Hamas places its weapons, the way that it often has its fighters in civilian garb, it’s terrible—remember, Israel left Gaza. They turned the keys over to the Palestinian people. And what happened? Hamas took over….We have a terrorist haven that is having more and more rockets shipped in from Iran and elsewhere,” she said.