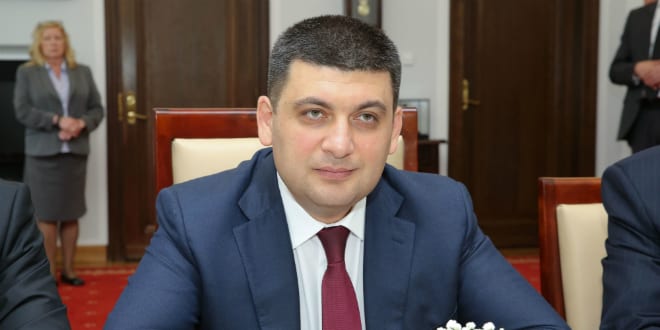 The Verkhovna Rada, Ukraine’s parliament, elected its first Jewish prime minister on Thursday. Volodymyr Groysman was nominated by President Petro Poroshenko and voted in by a sweeping majority of 250-57.

He served as mayor his hometown, Vinnytsia, from 2005 until 2014 and was popular, winning over 70 percent of the votes in his successful bid for reelection. He is considered to be an effective administrator and doubled the city’s budget..

Groysman, age 38, is also the youngest to ever hold the post. Though it is not unusual for Jews to be politicians in the Ukraine, anti-Semitism causes most to be more subdued about their Jewish identity. Groysman has family in Ashdod and is considered pro-Israel.

Groysman replaces Arseniy Yatsenyuk. Yatsenyuk survived a no-confidence vote in February but calls for him to resign lingered, leading him to leave the position. Ukraine’s government is plagued with corruption, and recently many untainted politicians have resigned in anger and disgust.

Before the vote, Groysman addressed the parliament, saying his government faced three challenges.

“I understand the threats that face us. In particular I would like to highlight three threats – corruption, ineffective governance and populism, which do not pose less of a threat than the enemy in eastern Ukraine.”

The “enemy” he referred to was the pro-Russian separatist faction.

Groysman’s grandfather survived the Holocaust by pretending to be dead after being dropped into a mass grave by Nazi troops. On January 27, International Holocaust Memorial Day, Groysman was the chairman of the parliament. He called for the parliament members to stand for a minute’s silence in honor of the victims of the Jewish genocide. It was the first time this had ever been done in the parliament.