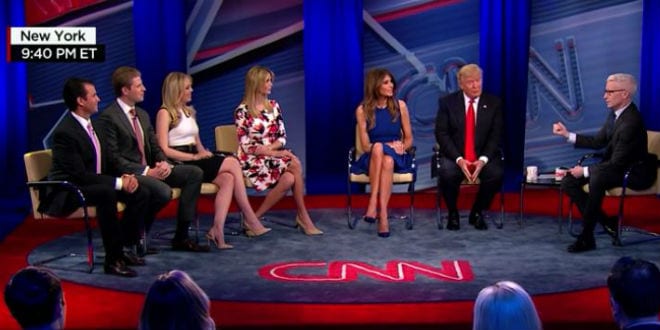 Ivanka Trump opened up on the subject of her conversion to Judaism during a CNN family interview on Tuesday, saying that GOP presidential frontrunner Donald Trump had been “very supportive” of her decision to convert.

In response to a question from the audience asking about Trump’s reaction to her conversion, Ivanka said, “My father was very supportive. He knows me. He knows and he trusts my judgment. When I make decisions, I make them in a well-reasoned way. I don’t rush into things.”

“I appreciate the support he gave me because, obviously, these decisions are not taken lightly, and it would have been much more hard if I had had headwinds,” she added. “He believes in me.”

She said that the strong relationship between Trump and her Jewish husband, real estate executive Jared Kushner, helped ease the process. “[My father] loves my husband; they’re incredibly close, which was obviously helpful, and he has been very supportive with me in that decision as in many others I have taken throughout the years.”

Ivanka underwent an Orthodox conversion to Judaism prior to marrying Kushner in 2009. The couple has three children. The youngest, Theodore, had his ritual Jewish circumcision ceremony, or bris, earlier in the month.

The CNN interview represented a break with Ivanka’s usual privacy. Trump’s eldest daughter has traditionally been quiet on the subject of her conversion and her Judaism, though the family openly identifies with the modern Orthodox movement and Ivanka has said they are “pretty observant.”

Husband Kusher is heavily involved in his father-in-law’s presidential campaign, acting as Trump’s advisor on Jewish matters. He helped write the well-received speech that Trump delivered at last month’s American Israel Public Affairs Committee conference, in which Trump mentioned his expectant daughter, announcing, “My daughter Ivanka is about to have a beautiful Jewish baby. In fact, it could be happening right now which would be very nice as far as I’m concerned.”

Trump has repeatedly expressed great pride in his daughter, saying at a New York event last year, “I want to thank my Jewish daughter. I have a Jewish daughter. This wasn’t in the plan, but I’m very glad it happened.”

Israel, and Jewish issues, have played a significant role in the presidential race so far, with candidates on both sides of the fence emphasizing their connection (or, in the case of the single Jewish candidate, Bernie Sanders, the rift) with the Jewish state.

The Jewish issue is all the more prominent as the presidential race moves to New York, which will vote in the primaries on Tuesday, and candidates attempt to capture the state’s Jewish vote.