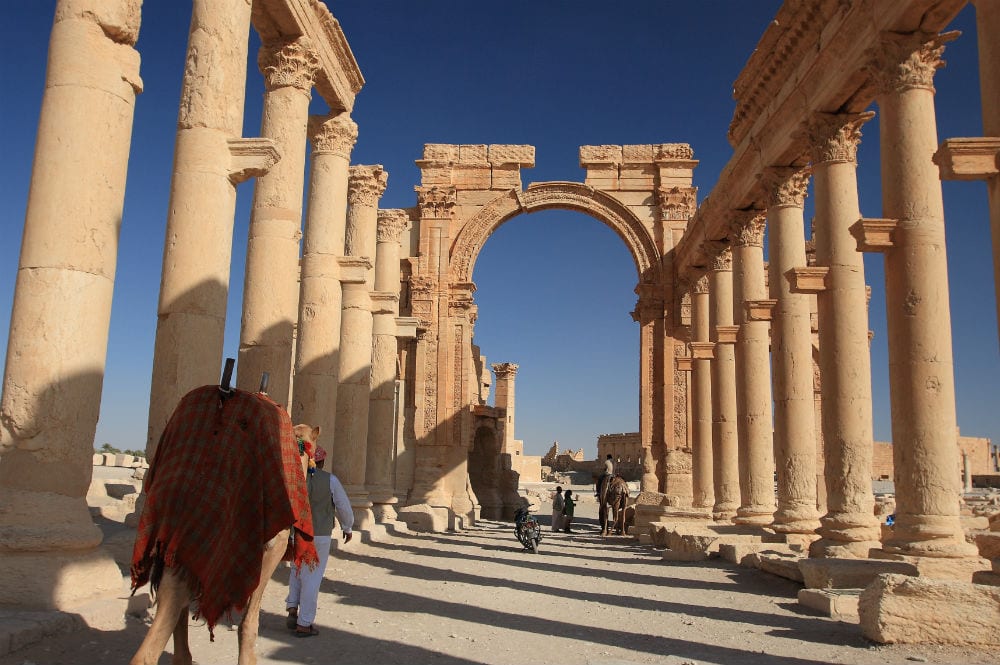 A recreation of the Roman Triumphal Arch that stood in Palmyra, Syria has been the focus of controversy, and rightfully so. A cryptic section of the Talmud describes the rebuilding of just such an arch as the precursor to Messiah from the House of David.

The original Roman Triumphal Arch stood for 2,000 years as the main entrance to the Temple of Bel in Palmyra, a city known as Tadmor in the Bible. The site has always been important, as a thriving urban center in the Fertile Crescent, but is also known for its powerful spiritual significance.

Originally built as a temple to the idol Ba’al, the Temple of Palmyra was repurposed at different points in history as a church and then, until its destruction in May 2015  by the Islamic State (ISIS), as a mosque. An archaeological wonder, it attracted over 150,000 visitors each year.

The 15-meter tall full-size reproduction is a project of the Institute for Digital Archaeology (IDA), a joint effort of Harvard and Oxford universities. Made using proprietary 3-D printing techniques, it will stand in Trafalgar Square, London as part of the UNESCO World Heritage Week. The IDA is recreating the partially destroyed arch as a showcase for new technology and as a symbol of protest against religious extremism.

The IDA has vociferously denied that the arch which stood at the entrance to the temple in Palmyra for 2,000 years had any connection to the temple. The institute has also cancelled its plans to erect a model of the arch in New York’s Time Square later this summer.

The arch is clearly a powerful symbol to many people. It therefore comes as no surprise that the Talmud explicitly predicts the present day saga of the of the Palmyra arch as a precursor to the Messiah of the House of David. The Hebrew-language religious website Sod1820 pointed out that in Tractate Sanhedrin (78a), the Talmud says:

Rabbi Shlomo Yitzchaki, a medieval French rabbi known by the acronym ‘Rashi’, is the primary source for understanding the Talmud. Rashi explains that the arch mentioned by Rabbi Yossi was “A Roman arch in a Roman city”.

The Palmyra arch is just such a one. Palmyra became part of the Roman Empire in the first century and remained so for the next 250 years. The arch was built in the 3rd century during the reign of Emperor Septimius Severus and represents a classic Roman arch.

Though the New York Post wrote that the IDA “plans to construct approximately 1,000 such versions of the arch in cities throughout the world”, Roger Michel, Executive Director of the IDA, contacted Breaking Israel News to clarify that the IDA is “supplying the files only, not the ‘prints’”.  With plans readily available and 3-D printing  becoming more widespread, it seems that it is only a matter of time before construction of another arch is attempted and Rabbi Yossi’s prophecy comes into effect.