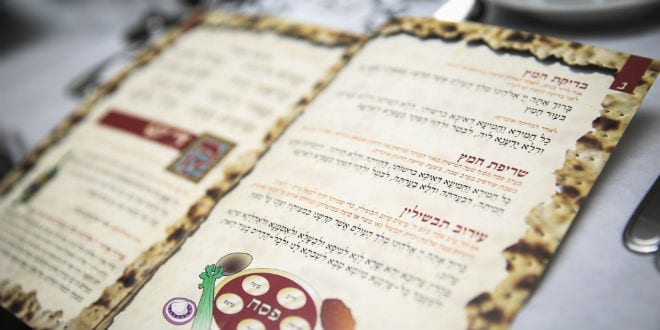 Remnants from one of the oldest surviving Passover Haggadahs in the world is now on display at the National Library of Israel, Israel Hayom reported on Friday.

The Haggadah is a special text used by Jews worldwide each year throughout the Passover seder (the holiday meal) which takes place the first night of the week-long holiday. It is comprised of 15 steps which guide the seder participants to fulfill the commandments of the night, such as eating matzah and telling over the story of the Exodus.

This particular page of the Haggadah, which is hand scribed on parchment, is believed to be from the 12th century CE, making it at least 900 years old. It was discovered as part of a collection of other archived Jewish texts known as the Cairo Genizah.

According to Dr. Aviad Stollman, head of the collections at the National Library of Israel, the Cairo Genizah was found in the women’s section of a synagogue in Cairo in the 19th century. Said Stollman, “In the ancient Ben Ezra Synagogue, there was a room which functioned as a genizah [a storeroom for sacred texts that are no longer readable or usable but cannot be destroyed] from as early as the eighth century CE.”

All together, the contents of the Cairo Genizah amounted to over 300,000 pages, both partial and complete. The majority of the Genizah documents were handwritten and from the last 1,000 years at least.

Written on the sole surviving page of the 900 year old Haggadah are “four small columns [of text] of eight lines each, with four or five words in each line,” Stollman explained.

The wording on the right-hand page of the Cairo Haggadah opens, “They were expelled from Egypt and could not tarry, also they had no food prepared for themselves,” and continues on to ask “Why do we eat the bitter herbs?”

The left-hand page features the explicit commandment for Jews to recall the Exodus: “In every generation, one has to view himself as if he himself had gone out of Egypt.” It then concludes by explaining the purpose of the Haggadah and the seder night: “Therefore, we are obliged to thank [the Lord], sing His praise.”

Even more remarkable is that “even though 900 years have passed, the text is nearly identical to the text we read today,” said Stollman, thus lending proof to the validity of Jewish history as it has been passed down throughout every generation.

The National Library’s full exhibit includes other Haggadahs as well, all of which were also written by hand within the past 900 years, including texts from Yemen, Iran, Iraq, and North Africa.

This year, Passover begins a week from this Friday, making the Haggadah display at the National Library very fitting for the occasion.