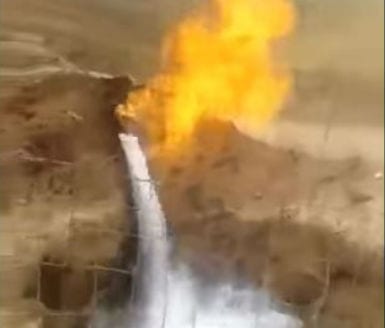 Yet another scene from the Book of Exodus has come to life as the seventh plague, described by the Bible as fire and hail mixed together, has miraculously appeared in a desert in Afghanistan.

A video posted on Sod1820, a religious Hebrew-language website, shows a group of people gathered in amazement around the source of a flowing spring in the desert on the border between Iran and Afghanistan. The reason for their shock is immediately apparent: large flames shoot out from the hole in the sand from which water flows.

The incredible sight follows close on the heels of another recent Biblical vision which awed the world: a satellite photo which showed the Nile River flowing bright red in an image directly reminiscent of God’s first plague against the Egyptians.

The latest inexplicable event is amazingly similar to the Biblical account of the seventh plague (Exodus 9:18-35), which describes a perfectly natural phenomenon, hail, that takes on a miraculous dimension when appearing along with its diametrical opposite – fire.

“So there was hail, and fire flashing up amidst the hail, very grievous, such as had not been in all the land of Egypt since it became a nation.” Exodus 9:24

Though there is undeniably a logical and scientific explanation for the bizarre phenomenon of water and fire together, the Biblical origins of the image are too clear to be denied. This particular spring of water in Afghanistan may not be a miracle, but it is clearly a reminder of the lessons the Bible teaches through the description of the plagues in Egypt.

The Bible prefaces the plague of hail in Exodus 9:14: “For I will this time send all My plagues upon thy person, and upon thy servants, and upon thy people; that thou mayest know that there is none like Me in all the earth.” The language implies that it is equal to all of the other plagues combined.

The Israel Bible gives an explanation of why the seventh plague was especially poignant in a way that is especially appropriate for the difficult times we live in.

“The hail contains both fire and ice, yet the fire does not melt the ice and the water of the ice does not extinguish the fire.  They are able to exist in harmony for the purpose of fulfilling God’s will.  Similarly, the medieval commentator Rashi comments (Gen. 1:8) that the Hebrew word for heaven, ‘shamayim,’ comes from the Hebrew words ‘aish’ (fire) and ‘mayim’ (water), as the two came together in harmony to make up the heavens.  This serves as a powerful lesson of peace and is referenced in the daily Jewish prayer service.  The following supplication appears multiple times in the liturgy: ‘He Who makes peace in His heights (between fire and water), may He make peace, upon us and upon all Israel.’”

Hints of the Biblical plagues have been appearing lately, seemingly in preparation for the Passover seder, when all of Israel will be retelling the story of the Exodus. The recent image of a blood-red Nile was the result of a special imaging process, but it was universally recognizable as a scene straight from the Bible, with even secular news sites making the Biblical connection.